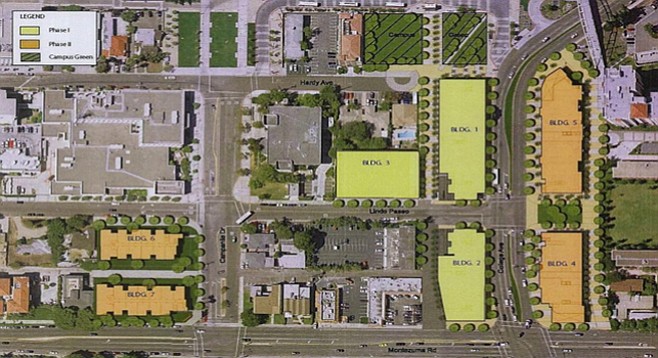 The District Nine representative sent a memo to Faulconer and Hirshman on February 4.

"Specifically, I am requesting that the proposal to install bike lanes on College Avenue between Montezuma Road and I-8, and widen sidewalks adjacent to the project be denied.

"Please confirm in writing that the South Campus Plaza Project will not reduce the current number of lanes on College Avenue between Montezuma Road and I-8; and further, that the option to expand College Avenue to three lanes in each direction at a future date will not be compromised."

When studying the environmental impacts the project could bring to the area, San Diego State relied on the city's long-term circulation plan to alleviate traffic congestion by turning College Avenue into a six-lane roadway. Planners abandoned a more pedestrian- and bike-friendly alternative that would have widened the current four lanes and added 5- to 7-foot-wide bike lanes and a 13-foot sidewalk north of Montezuma to the pedestrian bridge.

After learning of the change, residents living near the university objected to the last-minute changes.

"[San Diego State University] did this without filing a supplemental [environmental impact report] or notifying anyone in the community of this plan change," residents of the College View Estates Association wrote to university and city leaders on December 2, 2014.

"The proposal to keep College Avenue four lanes is couched in the language of environmentalism, arguing that it will reduce emissions and encourage walking and bicycling. We believe it is more likely to increase emissions due to increased idle time in traffic back-ups. Drivers avoiding the College Avenue congestion will have to choose already congested streets, thus making traffic in the entire College Area much worse."

Cycling and transit advocates are onboard with the new changes. Paul Jamason, board member for Bike SD, rejects the notion that increased lanes for autos translate to decreased traffic. Exactly the opposite, he says.

"Endlessly widening roads does not fix the problem," Jamason says. "It only creates more traffic, which quickly fills the new lanes, and we end up with the same congestion. There's even a term for it: 'induced demand.' Wider roads are more dangerous for pedestrians and people on bikes.

"Providing more commuting options is a better solution. [San Diego State] already has a significant pedestrian and biking population, which could be even larger, but they lack safe infrastructure around the campus. This project would widen sidewalks and provide a bike lane for them."

Jamason says that in choosing bike paths over traffic lanes, the city will get closer to reaching bike-share and public-transit goals as part of the city's Climate Action Plan.

"How do we reach those goals if we continue to deny pedestrian and bike infrastructure projects like this one?"

"In addition to the bike lanes and wider sidewalks referenced for the project,” says Ferrier, “we would also like to see improvements made to the intersection of Montezuma Road and College Avenue, adjacent to the proposed project. This is an intersection with very high rates of people walking and biking. The city has multiple policies in place that would promote design elements to improve pedestrian safety at this intersection.

"From what we can see, these improvements are not proposed as part of the South Campus Plaza project. To continue the increased walkability proposed for the project by [San Diego State], improvements at this intersection are critical. We’d like to see these included in the proposal."

Marti Emerald spokesperson Ralph Dimarucut sent the following statement: "Councilmember Emerald supports improved bike lanes, widening pedestrian friendly walkways, and landscaped medians throughout the College Area. However, she also understands the traffic concerns raised by the College Area Community Council (CACC) who voted to preserve the option of adding 3 lanes in each direction on College Ave. between Montezuma and I-8.

"She favors a plan that better meets the needs of everyone that will be impacted by the South Campus Plaza. She is continually meeting with stake holders on both sides to explore additional options that could lead to a better solution. Among other alternatives, she would like to consider the possibility of expanding bike lanes along Montezuma Road and into Montezuma Place to connect to the bike lanes on campus."

Wow! I wonder what ace girl reporter Marti Emerald would think of politician Marti Emerald? Is she going to count noses and contributions before talking out of only one side of her mouth?

Widening sidewalks usually means extra rent-free space for businesses. Clothing racks, art displays, and dining tables are the norm. Bicycles are the PR bi-product. Traffic is not part of the equation.

"Endlessly widening roads does not fix the problem," Jamason says. "It only creates more traffic, which quickly fills the new lanes, and we end up with the same congestion. There's even a term for it: 'induced demand.' Traffic on College Ave is the result of it being a connector to both I8 and SR 94 and 30,000 SDSU students most of whom drive to school every day. I'm sure SDSU has some data on the number of students with parking permits. Take a look at the parking lots on campus next time you pass by on College or Montezuma. As to the bicyclists, I don't know where anyone sees hundreds of students on bikes. I have lived in the area for 16 yrs. and travel both College and Montezuma frequently, I rarely see anymore than 1-3 cyclists in the area.
Increasing traffic is due to increased dense development in the area primarily housing students.

Hi Dennis, Paul Jamason here - when I met with Bob Schulz, VP of Real Estate at SDSU, I did ask him about parking permits. He said when the trolley went in, the number of permits decreased by 6,000, and it is decreasing every year.

Perhaps part of the reason you don't see people on bikes off-campus is because the roads are unsafe to ride on. Every city that has installed safe bike lanes has seen huge increases in riders (http://www.peopleforbikes.org/blog/entry/everywhere-they-appear-protected-bike-lanes-seem-to-attract-riders), potentially reducing the traffic congestion you're concerned about. Why not give people in the College area another safe way to get around?

Using current ridership numbers to argue against bike lanes is like saying we shouldn't build a bridge because no one swims across a river.

Paul, the decrease in permits is most likely due to the addition of several thousand new apartments the university built in the last 10 years in combination with the many shuttles used by nearby apartments. I'd like to see some data on the number of parking permits issued and total parking available on campus. As to your bridge analysis I suppose you could say that if you remove a bridge you could see an increase in swimmers. Anyone who drives by SDSU can see that a large part of the traffic problem is the students most of whom commute from areas some distance from the university.

Thanks for your reply Dennis. I've never heard that response to the bridge analogy. What "bridge" would we be removing in this case? There are no safe bike facilities to remove that would somehow increase the number of people on bikes. And the metaphorical river (our current roads) is too unsafe to swim across. So I'm completely lost on the point you were trying to make.

More housing near campus and shuttles to get them there (or bikes!) is definitely a good thing, versus the distant commuters you mentioned.

As a current student at SDSU, I would have to agree in saying the proposal to make more lanes for cars and decrease opportunities to walk/bike/skate etc is a terrible idea! I used to drive to school every day and we all have to agree in that the congestion from auto traffic is never going to be resolved. Even with the added lanes the surrounding land does not fit the demand for its increasing users. I recently, moved near campus and now walk every day to class and sometimes bike when I'm in a rush, but I refuse to ride my bike on the street due to the high volume speeding traffic and fear biking on the sidewalk for safety reasons. Speaking from my own personal experience, the sidewalks are not wide enough to fit both pedestrians and bikers, which has caused numerous occasions where I was forced into the streets to go around. It is obvious there are countless students who walk/ bike to school; many who live in the community and many who park in nearby neighborhoods to then walk/bike just to save themselves from the paying the $162 on-campus per semester permit fee that is consistently increasing. There is no wonder why there has been a decrease in permits purchased and an increase in students finding alternative means of transportation. This community is highly impacted by the university and its students make up its majority. I am not excluding non-SDSU members, but the more these students walk/bike themselves on campus will substantially decrease the amount of traffic on the streets for everyone, so why aren't they encouraging it? The city officials who are against providing their pedestrians safer access along their roads is an act of disservice and makes me question the real motive for denying the proposal.