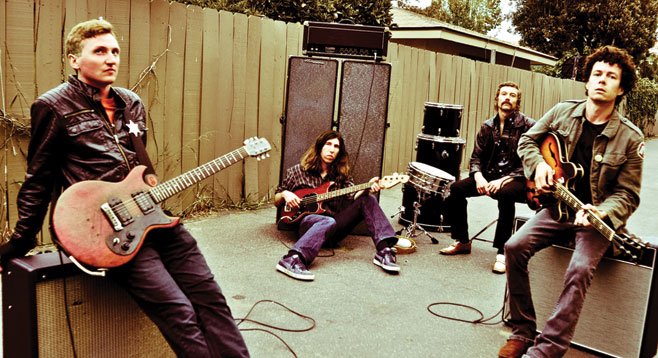 The Bloody Hollies, Yours Until the Bitter End

The garage rock bands of the ’60s weren’t meant to last. Typically, they played a bunch of shows, cut a single or two, and then the members went off to college, marriage, or Vietnam. Modern garage bands don’t have to worry about the draft, but they have most of the old pressures and a few new ones. Those that do survive have to figure out if they are going to be revivalists their whole lives or if they’re going to evolve. Even the White Stripes couldn’t figure these things out and decided to break up.

The Bloody Hollies have been some of San Diego’s foremost garage rockers since singer-guitarist Wesley Doyle moved the band here from Buffalo, New York, eight years ago. The band’s punk-blues-fueled If Footmen Tire You… won Rock Album of the Year at the San Diego Music Awards in 2007 and sent them touring the world. But last fall’s Yours Until the Bitter End found the Bloody Hollies supplementing their sound with much more elaborate arrangements and songwriting — not to mention occasional touches of organ, violin, and xylophone. There’s even a little interlude at the end of the song “Dead Letter” that I swear must be a musical reference to the legendary psychedelic folk-rock band Love.

This could be a tricky transition, but I think the Bloody Hollies will have an easier time than some of their peers. For one thing, they never did seem particularly purist about their garage rock. There has always been as much Stooges in their sound as there has been Nuggets. For another, they’ve still got Doyle’s ragged scream. With that voice, he could sing lullabies and still sound like garage punk.