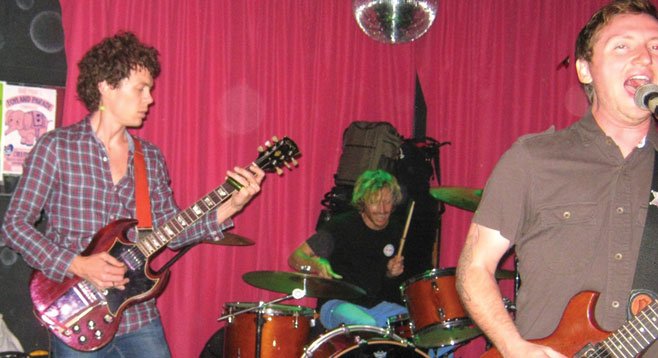 If You Want Blood, You Got It

On November 8, Cherry Bar owner James Young flew the hard-rocking San Diego band Bloody Hollies to Melbourne for two shows. Guitarist Joey Horgen describes the junket as “a test run” for an alliance between the band and Australia, adding, “James was happy with everything. He’d like to bring us over annually for shows and festivals.”

The Cherry Bar is on AC/DC Lane, and the band has mentioned AC/DC’s influence. Are there AC/DC songs in your repertoire?

“Nah, not really,” says Horgen. “‘Back in Black’ is a go-to riff between us at sound checks and practices. We played ‘If You Want Blood’ for the encore on the first night in Melbourne. After the show, James came up and said, ‘Joey, I want you to meet someone very important.’ I walked to the end of the bar, and there was this little guy standing there. James said, ‘You guys just played “If You Want Blood.” Well, if you want blood, you got it. This is Bon Scott’s son.’ Holy shit is what went through my mind — I didn’t know what to say. He grabbed my hand and shook it and said, ‘That was a fucking brilliant show, mate — fucking rocker!’ Then he looked me dead in the eyes and said, ‘Me dad would have been fucking proud.’ Jesus Christ! That was my highlight of the trip.

“The last night there, Matt and I were turning it on quite a bit, going to different bars in Chinatown. We went back to the hotel to see where the bass player, Erik, was. He was sleeping, as most people do at 3 a.m. We weren’t having it — we kicked his door open and tried to persuade him to come out. He wouldn’t budge. After an hour of trying to get him out of the room, we decided to bring the party to him. So we brought every piece of furniture from the living room and crammed it all in Erik’s room. I mean everything — couches, chairs, lamps; the trash that was on the floor. The dining room table wouldn’t fit through the doorway, so we had to take it apart and reassemble it in his room.”

I ask guitarist and lead singer Wesley Doyle whether the band caught any flak from the hotel for its rock-star shenanigans.

“No, we cleaned it up. When I walked in, it was pretty hilarious. I didn’t think it was funny when I realized how much cleaning we had to do.”

In February, the Bloody Hollies embark on a Northern European tour in support of their latest album, Yours Until the Bitter End.