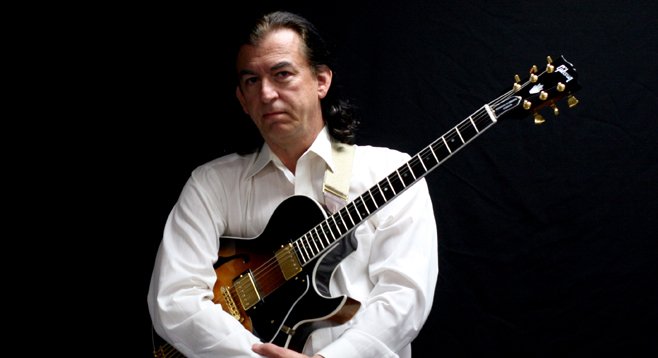 “The kids are playing everything from Sleeping with Sirens to Taylor Swift,” says guitarist Wayne Riker, who just launched a new guitar curriculum at Coleman Tech High School in Kearny Mesa. “I’m there five days a week all year-round [and] will be bringing in esteemed local guest artists each month for workshops and a concert series. Nothing makes me happier than seeing these kids on a daily basis, beaming with excitement, provided with the opportunity to learn a musical instrument, particularly in this age of vanishing music programs.”

The full-time paid position finds Riker teaching several 45-minute classes each day, made up equally of boys and girls. “The students, a dozen or so in each class, all have guitars, mostly acoustics, some donated, some acquired by the school, and some hand-me-downs from their households.”

Riker has been teaching guitar around town for over a decade, including a recent stint at Rick’s Guitar Shop. “My teaching philosophy has always been the same, whether in a group or one-on-one, which is to teach students songs and styles that they want to learn. Hence, I’m transcribing six to eight songs a week, from classic and alternative rock to metal, reggae, pop, country, rap, blues, and Mexican pop tunes.”

The school will soon move into a new building on Aero Court, with Riker performing at a ribbon-cutting ceremony slated for December 29. “The larger facility will give me the opportunity to bring in guest players once a month, in an assembly-like setting, exposing students to some of San Diego’s top-shelf pros from all different musical arenas.” Alternating male and female guitarists, guest players will include Robin Henkel, Steph Johnson, Jimmy Patton, Roni Lee, Fred Benedetti, and Veronica May.

“Conveniently, my teaching studio is a few minutes away from the school, so I’m teaching the other end of the spectrum as well, with private lessons to a couple dozen baby boomers each week.”