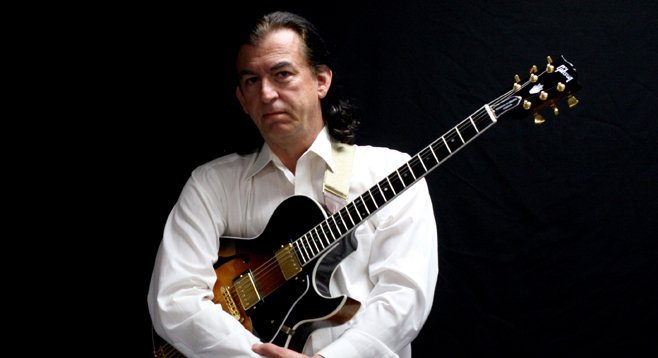 “I moved to San Diego County in 1980. My playing career started in my hometown of New York City in 1967, in various eclectic groups, beginning in clubs in Greenwich Village, through the heyday of the
Jersey Shore, before moving to the midwest in 1974, playing in the Kansas City area through 1978, and in the Minneapolis area in 1979, before taking a year off to study guitar at the Guitar Institute of
Technology in Los Angeles in 1979 and 1980.”

As a member of the Guitar Institute, Riker has cohosted workshops around the world with A-list jazz and blues cats such as Larry Carlton, Robben Ford, Marty Friedman, Dave Grissom, and Duke Robillard.

“In my 32 years in San Diego County, I’ve played in 35 groups, including big band, musical theater, cruise ship and musical duos, along with the more obvious aggregations of top 40, country, funk,
jazz, rock, R&B, and blues groups.” Concurrently, Riker has also taught private guitar lessons, in the North Park area from 1980 through 2010 and at Rick’s Guitar Shop.

He’s also taken to telling stories between and during his instrumental performances, such as the time he met Jimi Hendrix cohort Randy California of Spirit or how he almost went to Woodstock in 1969 but instead ended up at a jazz fest featuring a brand-new group calling themselves Led Zeppelin.

In 2011, he helped launch a new Facebook page called San Diego Gives Me the Blues, with local band histories, performance videos, and blues lessons. Around the same time, he began recording a new CD, Guitar Decathlon, featuring ten original tracks in ten different music styles, each with one of ten San Diego guitarists as a guest player.

As of 2012, his Quick Licks column is running in Guitar Player magazine. Later that year, he launched a new guitar curriculum at Coleman Tech High School. “Getting music into our schools,” he told the Reader. “I'm there five days a week all year round [and] will be bringing in esteemed local guest artists each month for workshops and a concert series.”

The full-time paid position found Riker teaching several 45-minute classes each day, made up equally of boys and girls. “The students, a dozen or so in each class, all have guitars, mostly acoustics, some donated, some acquired by the school, and some hand-me-downs from their households.” In 2013, Israel Maldonado took over the high school guitar class at Coleman Tech High School for the following school year.

"The tunes are rhythm & blues, fusion and jazz based flavors, each track designed to fit the musical personality of each guest artist," says Riker of the album, his fourth consecutive one recorded at Studio West in Rancho Bernardo. "Bob Campbell plays tenor sax on the track 'All Aboard Blues,' and all the guests join in on rotating 32 bar solos, as a grand finale. Three of the tracks feature a small live audience, brought in post production, as a listening party, reacting to the music and a handful of Bob Wills-Zappa-esque microphone moments on three of the tracks."