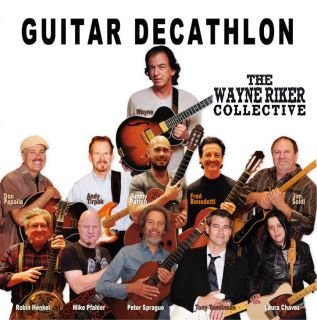 Guitarist Wayne Riker has spent a lifetime in music, developing skills and mastering many genres of music. He is extraordinarily versatile, and his latest record Guitar Decathlon is a celebration of his stylistic range.

The disc pairs Riker with 10 of the areas top guitarists, fronting a variety of rhythm sections.

Opening strongly with "Hurdles", Riker's partner on this "jump-blues" is the remarkable Laura Chavez, a real find. "Hurdles" swings from the get-go, powered by the protean string bass of Bert Newman and Tyler Buckley's drums. Chavez has a great, crisp style--she and Riker lay down some slurring diminished chord mayhem.

"110 Yard Dash," is billed as a rockabilly track, but it sounds closer to the new-country style of Vince Gill, maybe, to me. Jim Soldi teams with Riker for excellent, idiomatic solos, and the upright solo from Mike Curtis nearly steals the show.

"400 Meter Blues," brings local heavyweight Robin Henkel in for a duet of acoustic guitar and dobro--both players flexing their slide chops over a chord progression that reminds me of "Black Water," the old Doobie Brothers tune.

Straightahead jazz gets a nod with guest Dan Papaila sitting in on "The Roman Mile," wherein Papaila and Riker do their best to out "Wes" each other over the Herculean bass of Bob Magnusson. It's a great track--one of the strongest--but it's hampered by an disappointing fade-out at the end.

"Shotput Blues," is a Chicago styled affair with the heavily trebled-out Tony Tomlinson in tow. He and Riker exchange string-bending heroics on this track which alternates between shuffle and quasi-Latin grooves.

"Long Jump Bossa," features the phenomenal Peter Sprague. Bob Magnusson's thick bass tones outline the vamp, while Riker's electric guitar slurs and coos the gentle theme over Sprague's nylon-string wizardry. He hits the gates first with zigzagging arpeggios and sweet chord-melodies. Riker's solo isn't quite as successful until the tune morphs into double-time at which point he shadows Sprague in a satisfying exchange of ideas. Again, though, there is a fade-out, which seems curious.

"High Jump Etude," is the mandatory rock tune, with guest Mike Pfahler trading "shreds" with Riker over a kind of formulaic sounding progression. Both guitarists perform with impressive speed and trade harmonic-minor ideas throughout.

Finally, "Javelin Concerto," finds Riker in tandem with noted classical guitarist Fred Benedetto jamming on a theme that marries flamenco ideas with a progression that reminds me of producer George Martin's work with the Beatles. Very inventive.

All in all, Guitar Decathlon is an enjoyable listen, with some great playing by guests and host alike.

“All of these players I’ve either heard of over the years, or I’ve played with, and they’re all guitarists that have a high musical IQ,” says Wayne Riker, whose new full-length Guitar Decathlon features ten tracks, ten styles of music, and ten top San Diego guitarists, one on each song.

Asked about his guest choices, Riker starts with 28 year-old Laura Chavez, who plays a jump-blues number. “I caught her with Candye Kane's group back in 2010, where I was immediately impressed with her command of the fretboard as a rhythm and lead player.” Jimmy Patton performs an acoustic fusion track. “I remember seeing Jimmy on some of the local TV morning shows, back when he was a teenager, playing two guitars at once with an amazing sense of melody and improvisational skills.”

Jim Soldi appears on a rockabilly track, “I first met him in 1981, when the country scene was bubbling over during San Diego’s Urban Cowboy phase…[this is] the first time we’ve played together.” Andy Tirpak takes on a funk number. “He’s been a longtime veteran bar band musician, playing in numerous bands [like] Atomic Groove and Mother Belle.”

Dan Papaila’s jazz track stems from when he and Riker both taught at Old Time Music in North Park, circa 2007. “We were wall-to-wall in our teaching studios, and would often trade licks back and forth, in between students.” Robin Henkel appears on an acoustic blues song. “We’ve shared many of the same students, particularly blues and jazz.”

For the rock track, “Mike Pfahler is currently with Nemesis, now celebrating 25 years on the local scene.” A Latin number features Peter Sprague, with whom Riker has only performed with publicly once, in 1992 (backing Deborah Liv Johnson). The recording also includes Tony Tomlinson playing urban blues, and Fred Benedetti on a classical tune.

Riker wrote and plays guitar on all the tracks, as well as producing.

“I liken the recording process to an Alfred Hitchcock production, meaning, for the most part, unscripted. There are no overdubs, and most of the tracks were done anywhere from one to three takes, creating a strong live vibe. The absence of keys, horns, or strings keeps an emphasis on the two-guitar theme.”