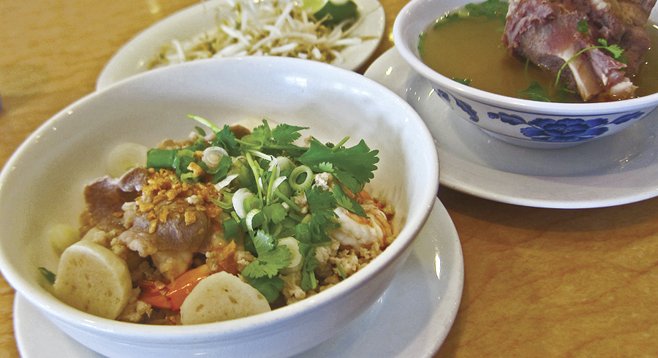 A few years back I noticed that a place that looked like a new mi (egg noodle) shop had opened on University Avenue, right across the street from the now defunct 79 Supermarket. But while the lettering on the front window says Thai-Lao, the menu is in Chinese and Vietnamese. The interior is equally confusing, with paintings that look obviously Thai, yet there’s also one of a water buffalo that looks strangely Vietnamese, and one of the Great Wall. So, which is it? 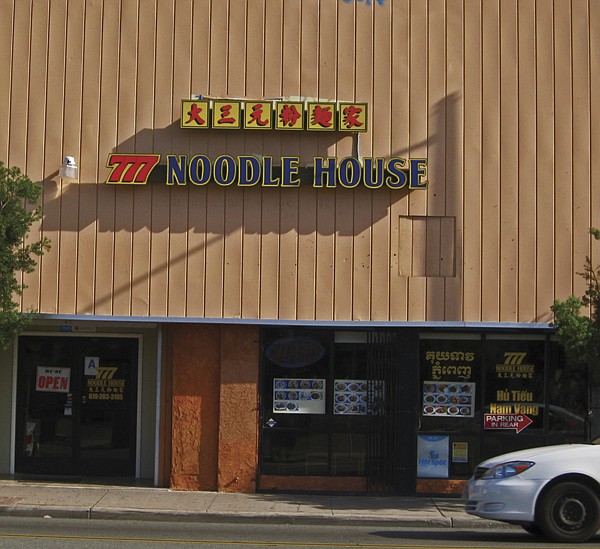 The truth is that it’s all of the above. The owners are from Cambodia, but before you go looking for Khmer dishes like amok (which the Missus couldn’t get enough of in Siem Reap) or something made with a fragrant and herbaceous kroeung, the spice paste that is heart and soul of Khmer cooking, you need to dig deeper.

Fare: A combination of Chinese-Thai-Vietnamese-Cambodian dishes

Need to know: Parking in the rear of restaurant

After asking around, I learned that the owners are ethnically Chinese, from Chaozhou (Chiuchow/Teochew) — the largest percentage of ethnic Chinese in Cambodia are from Chaozhou. It is these Chinese emigrants that are said to have brought the one dish that you’ll see posted just under the “777” sign outside the restaurant: Hủ Tiếu Nam Vang. Nam Vang is the Vietnamese name for Phnom Penh (thanks for the confirmation Kim!). Hủ tiếu are noodles made from either tapioca or rice flour, thus Hủ Tiếu Nam Vang equals Phnom Penh noodles. The Cambodian name for the dish is kuy teav, and it has become a popular noodle-soup dish in the southern provinces of Vietnam, having made its way there during the ’50s and ’60s. So, what you have is a dish served in many Vietnamese noodle shops, named after the capital of Cambodia, brought there by Chinese. Isn’t diaspora a wonderful thing?

The Hủ Tiếu Nam Vang, priced at $4.97, is one of the cheapest items on an already inexpensive menu. The broth is light, the noodles display a nice stretch, the slices of pork are a bit tough, and the fish balls have a squeakiness to them; the dish is served with blanched bean sprouts and a wedge of lime. A better bet for about 80 cents more is the kho (dry) version of Hủ Tiếu Nam Vang, where the pork-based broth is provided on the side, and the noodles have been warmed in the broth and mixed with a mildly sweet soy-based sauce. Like the soup version, slices of pork, a couple of shrimp, fish balls, and a scattering of ground pork round out the protein. Well, not quite; I always love the piece of simmered pork shank that arrives with the broth. There’s just a bit of meat for gnawing on that bone, but it gets my stomach growling and adds drama to the dish. This version of Hủ Tiếu Nam Vang is one of the few I’ve had without offal in it. Of course, there are as many versions of this noodle soup as there are restaurants serving it.

Another dish we enjoy is the Fried Leek Cakes. The dough for the cakes is made with glutinous rice flour, making it gooey and crunchy at the same time. The filling is chive, not leek, and can be molten. The flavors are like life, a little sweet, a little salty, with a touch of bitter. Leek cakes take awhile to make, so they’ll usually arrive after most everything else; you’ll need to excuse that. 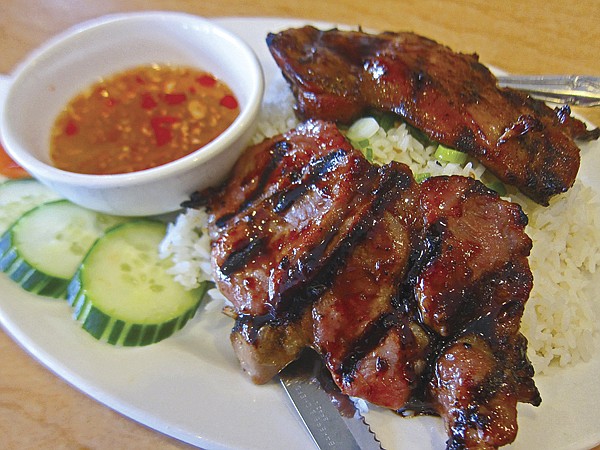 The menu is full of other types of noodles. Of the egg-noodle soups, the duck leg is my favorite. The duck leg is roasted, then deep fried, which makes for a crunchy skin. It’s not a huge piece of duck, but the dish is reasonably priced. The broth can be weak for egg noodles, so I’ll often ask for an extra serving of the sweet soy that’s provided for the duck and add it to my broth.

My friend JohnL and I enjoyed the Pig Intestine with Preserved Vegetable, in which the slightly musty flavor of pork intestines have been counterbalanced with pickled vegetable. It can be made spicy as well. The Missus likes the Shrimp Thai Spicy Fried Rice, which is very old school, well coated, and dry enough that you can count every grain. The BBQ Pork Chop was tasty and tender, but the BBQ Chicken was fairly dry and tough.

The menu is huge — I’ve only scratched the surface here — with over a hundred items, and not without pitfalls. I thought the price of the French Beef with Steam Rice (Bo Luc Lac) was too good to be true at $6.77, and so it was; the meat was salty and tough. The Ginger Chicken tasted off and was rubbery. The pan-fried noodles were on the crumbly side. Luckily, I’ve found favorites on the menu and have stuck to those.

For me, 777 is my neighborhood noodle shop, even though I don’t work, or live, remotely close to City Heights. I’ll often stop by on weekend mornings after going grocery shopping at Minh Huong Supermarket two blocks away. 777 opens at 8:00 a.m., and I like the noodles for breakfast. My favorite server is Annie; she always gives a smile and a hello. Her sister is also nice, as is the gentleman who calls me “sir.” They bring warmth to a cavernous, fairly cold, dark space that used to be a pool hall. Other quirks include the televisions constantly tuned to Fox News or CNN, and the selling of lottery tickets; after all, they are “777.”

I’m usually wary of menus I find too diverse. Thai-Lao-Chinese-Vietnamese: who can do it all? And perhaps 777 Noodle House does stretch things a bit. But on one recent morning, as I had my breakfast, I heard Annie speaking Vietnamese to some customers, Spanish to the family seated to the left of me, and Mandarin to a nearby mother and daughter. The pair asked me about my leek cakes, and I could tell them it was “xian bing.” Meanwhile, people at a table behind me were chatting in either Lao or Thai. At that moment, I thought 777 Noodle House had it exactly right.