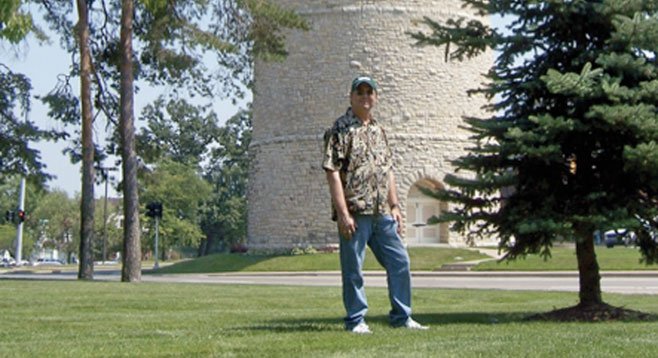 Post Title: The Water Tower — Digging Up the Past

Hello from Washtenaw County, home of The University of Michigan and Eastern Michigan University. I am in Michigan doing research for my next writing project, which has the working title of The Water Tower. From July of 1967 until July of 1969, a phantom killer left two college campuses in a state of sustained fear and terror.

John Norman Collins is reputed to have tortured, murdered, and mutilated seven young women from the Ann Arbor/Ypsilanti area. He was convicted of only one of the murders, and many questions have been left unanswered.

Several people have come forward with new information regarding this case. There is more story here, and I mean to tell it.

One of the most surprising and disturbing discoveries on my recent trip to Ypsilanti, Michigan, was that the house where John Norman Collins lived and may have committed unspeakable crimes against young women 45 years ago is now occupied by a sorority. I’m told that in 1990–91, a dormitory wing was added to convert the original home, built in 1870, into the Alpha Xi Delta house just south of Eastern Michigan University’s campus.

My time in Ypsilanti was well spent. I spoke with a woman who often rode on the back of her boyfriend’s motorcycle, while he and Collins toured the back country on lazy summer weekends — in an area where all of the young women’s bodies were dumped. She left me with several important insights that I’ve not read or heard before.

I also heard a chilling tale of a young Eastern Michigan University woman who was fixed up on a double date with John Collins. She fit the profile of the murdered women to a tee. This may have been the woman to whom John confessed that he didn’t believe in the fifth commandment: Thou shall not kill. I am getting her contact information, so I can confirm that when I speak with her.

I was just settling into an interview with someone who knew John Norman Collins. It was a late lunch meeting at Haabs, downtown Ypsilanti’s oldest and finest restaurant. I overheard two women, sitting in a booth adjacent to us, talking in hushed tones about John Collins and those times. What a coincidence!

One of the women worked for the county police as a dispatcher at that time, and the other claimed to be a psychic.

“How amazing is this?” I said. “I just learned something new about Peter Hurkos, the Danish psychic, who was called onto the case by a citizens’ group.”

I didn’t go into this with the ladies, but Hurkos appeared in the disturbing Tony Curtis movie The Boston Strangler, which John Collins was known to be obsessed with.

“Here is what I found out,” I continued. “A Mr. Allen, head of an Ann Arbor citizens’ group, offered Peter Hurkos $1100 for expenses to come down from LA and look into this case.”

“The man had powers,” the psychic insisted. “He was a painter and fell off a ladder and banged his head, or something like that, I don’t remember. From then on, he could sense people and events from handling their things.”

The police dispatcher added, “Yes, that’s right. I remember Lt. William Mulholland, an investigator on the case, saying, “He (Hurkos) is making a believer out of me.”