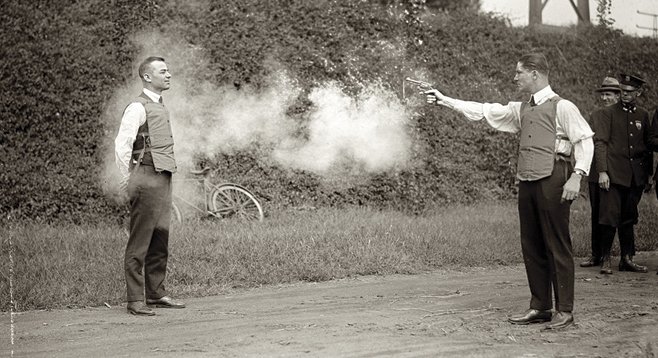 The phone is ringing. Time: 2:30 a.m. “This is officer Max Force, San Diego Police.” I start to wake up: none of the kids have done anything really stupid for a week or two, so what is the deal? The guy asks if I own the house at 3575 Quince: yes. Do you have a key: yes. We need to get in; someone may be hurt. When I get there, I notice that the door is open and a little skewed; they used their universal key. Nobody was home.

I had been renting this house to Cindy for quite some time. “Mr. Mondt, I’ve known you for one-third of my life,” she said once. She had recently moved and recommended her friend Carlos as one who wished to rent the house. My MO had evolved into: rent the son of a bitch and fight it out later. I signed Carlos up and everything was cool. He was clean, paid cash on time, and frequently asked my permission to make improvements. Carlos was the party that was not at home when the police opened the door. Good thing for Carlos. There was a fairly large number of small holes in the back of the house, right where Carlos slept. I suppose the neighbors were awakened by the disturbance caused when some of Carlos’s acquaintances tried out their Uzis on his bedroom wall. So, you may wonder what Carlos was doing. Beats me; he was not to be seen. Later, I was at 3575, making preparations to rent it out again, and Carlos appeared in a rather subdued mood and stated that he would not need the house anymore. I never saw him again. A girl who lived in one or the other houses knew Cindy and said that Carlos had been located by the fellows who had ventilated our house and had died as a result.

Larry asked me if I knew that Lenny had bought a bulletproof vest. Why would he do that? Not that I would think it was not true, but there had to be an interesting reason. Less than a block from [Lenny’s] house, a young couple had moved in. [Lenny], in the process of welcoming them, made friends with the lady. Her husband was an armed security guard, so rather than disappoint the lady, he decided to take precautions.

Lenny told me that he married an older woman to learn about women. So what’s wrong with a practical approach to education? Seems as though it was effective.

Don reported that Lenny’s wife, in a fit of despondency, went to see the trailer folks to arrange a contract on his life. Must not have worked out, however: Lenny bought the bulletproof vest from the same fellows.

I was showing him my family pictures and pointed out my dad. I told him my dad died when I was a little boy. Lenny said his dad died when he was little, too. A venomous snakebite was the cause. Seems they were at the church service and his dad was testifying (handling the snake, seeking salvation and revelation) when the viper struck and, seeing as how one of the tenets of the faith was that GOD was the only source of healing, no doctor was summoned. Probably a lack of faith. His mother died of pneumonia in similar circumstances, no doctor.

Chemistry has always been a disappointment for me. I looked forward to my first class in anticipation of learning to build loud explosives, rockets, clouds of dense smoke, etc., etc. My hopes were not realized, and I developed a deep sense of revulsion toward the teacher; it was apparent that the feeling was mutual. I did not give much thought to the whole deal for many years, being apolitical. Eventually I realized the root of the loathing was this: Mr. Shadle was a LIBERAL, SELF-DESCRIBED INTELLECTUAL. I cheated my way to a pass, took advantage of the lab door being left open, and made some great BOMBS. I gave demos for many friends and family and gained a considerable degree of respect in certain venues.