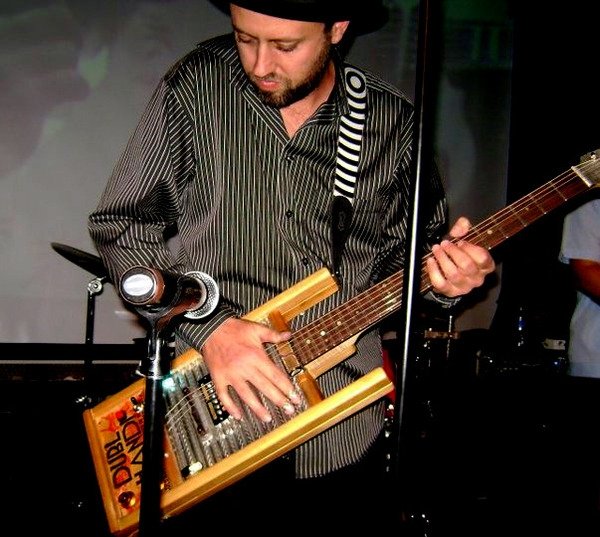 Oceanside’s Nathan James became a blues guitarist by mastering the Piedmont fingerstyle, which produces a complex ragtime sound and is created by thumbing the bass string while picking out a syncopated melody with the fingers. James learned by listening to old records by Blind Boy Fuller and Big Bill Broonzy, Blind Blake, and Blind Willie McTell.

“For some reason,” he says, “all the blind guys were phenomenal pickers.” By the age of 19, James left his native Fallbrook for the road with internationally known bluesman James Harman. He worked with Harman exclusively for over three years before going solo. Later, James teamed with Ben Hernandez, a young mohawk-sporting blues traditionalist from San Diego. In 2007, the duo took first place at the International Blues Challenge in Memphis, Tennessee.

Before Ben Hernandez moved, I caught your show at the Belly Up in Solana Beach. You two were like the Smothers Brothers of the blues. How much of that was rehearsed?

“Most of everything Ben and I did was never rehearsed or planned. Certain songs were done the same, but we were always rearranging them or improvising new ones on the spot, which is something I learned from James Harman.”

What did Harman teach you?

“He told stories about things he learned from people such as Muddy Waters, B.B. King, and many other legends he personally knew — stuff that would be impossible to learn from reading a book or going to college.”

“Stories of his band playing, and someone like T-bone Walker or Freddy King would walk in and sit in on guitar. They would have their own tone, no matter what kind of guitar or amp it was. He taught me that it’s all in your fingers, and about having your own style.”

Have you worked any strange day-jobs in the pursuit of a career in music?

“The only job I’ve ever worked in my life was from the age of 14 to 18 for my family’s house-plant nursery, doing odd jobs like welding and killing weeds.”

Did the welding skills come in handy when you began converting washboards into guitars?

“I did quite a bit of soldering on the washboard guitars but haven’t had to weld anything on them yet. My dad was a handyman and taught me how to work on most anything.”

What inspired you to build such an instrument?

“At first it was just to create something wild looking, but then I realized it was practical for playing the washboard part of it also.”

Where do you get washboards?

“The first one I got was from an antique store. I’ve bought several from eBay, but the ones I prefer are actually still made by the Columbus Washboard Company. The Dubl Handi travel size.”

“Well, there were small problems at first, but I’ve pretty much got them working good now, including battery-powered LED lighting systems. The first one I made is a standard six-string I call the Washtar Gitboard. The second one I call the Tri-Tar. Its neck is made from an axe handle, and it has three strings. It’s tuned down to the key of C, so it has a lot of crunch. And the third one is the Baritar Baritone guitar tuned down to a low A! That one has very lethal tone.”

Before the washboard, did you think about trying out different household items, such as a cutting board or a skillet?

“I hadn’t, but I have been brainstorming for quite some time.”

For an electric-blues guitarist, you tend toward the old school...

“I think the guitar-based blues-rock styles are dead and not original anymore. The over-the-top, never-ending, loud, electric-guitar-driven blues are boring for young people. I think new blues fans are more likely to be drawn to the raw and stripped-down, even acoustic styles — maybe because it’s the antithesis of the over-saturated electronic music of this era.”

“That’s a secret!” He laughs. “Just kidding. Yes, that is my plan for the next one. It will be made from the larger-sized washboard and will probably be a Tri-Tar and regular six-string in one. Watch out!” ■

Nathan is a local O-side cat who has traveled the world playing blues. He is the real deal and respected by blues musicians all over the globe. James Harman is a legendary blues harp player, songwriter, storyteller, singer, and quite a comedian. A living legend! Their backing band is one of the best in the business. Another local boy, Troy Sandow is on bass (upright & electric), is also quite a harp player. The drummer is Marty Dodson who has backed every living famous harmonica player in the world. One of the best blues drummer I have ever seen.

This is real American music.