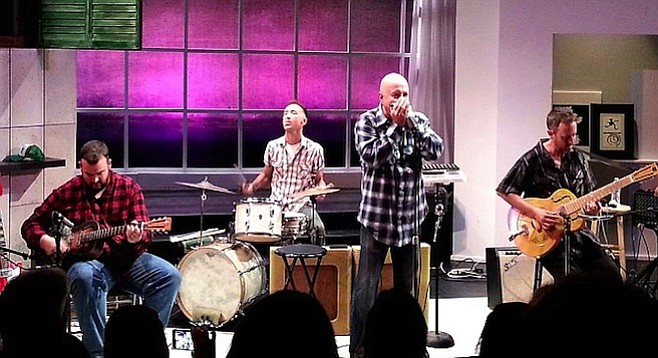 Big Jon puts his harp where his mouth is

Big Jon Atkinson is putting his blues where his harp is. This Southern boy, a recent San Diego transplant, is getting together with a few of his friends to throw a blues party on Saturday, January 10, at Proud Mary’s in San Diego. The festivities will feature some of the nation’s best-known harp players, as well as San Diego’s own Nathan James and the Rhythm Scratchers.

Atkinson says his blues and his intentions are simple. “I would say I am just trying to get the music out there. San Diego has very few shows where five or ten of the best blues players get into the same room and play. I am trying to get more big events down here for the blues.” 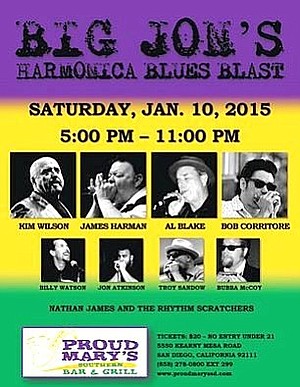 Known for his screaming slide-guitar blues, Atkinson says he got his first guitar at 14 and then discovered Lightnin’ Hopkins, Little Walter, and Howlin’ Wolf. “That was it for me, I was hooked!”

Learning multiple instruments came out of necessity, Jon says. “I started playing harmonica two years ago because nobody in Knoxville at the time could play harp the way I heard it in my head or on the records. I listen to this music so much every single day that it is just so natural for someone who does this [plays music] to have a feel and a head start on all the instruments. When I committed to playing harp, I could already hum you every Little Walter and Big Walter solo on any tune, so it was just putting it to the actual instrument.”

Big Jon and the Nationals is Atkinson’s blues band. “Well the band has just been what I call my group where ever I end up,” says the bluesman. “I mean it is a simple name and quite a simple band. We play everything from J.B. Hutto to Robert Nighthawk to Junior Parker and Muddy Waters. Also I have plenty of retro-era sounding originals that we play.”

After arriving in Southern California, it wasn’t long before Atkinson started meeting other blues enthusiasts. “The first experience I had was playing with Mark Mumea and the Silver Kings. That was a great chapter for me, as it got me thinking the old way again, as if I had gotten off-track at some point. Everyone needs a little push sometimes. Then Nathan James and I started talking and he invited me to sit in with him. I went down and met the guys and played with him and Marty Dodson and Troy Sandow, who now are great friends.” And as if that wasn’t enough, Atkinson says, “That day I got to play with James Harman... All these guys were so good to me and still are to this day. I am a blessed man to have run into these cats.”

Speaking of friends, Atkinson has been seen recently in the company of another “Fabulous” harp player, Kim Wilson. “I got involved with Kim at a venue that Cadillac Zack had me play on,” he says. “I was backing up young harp master Jacob Huffman who now plays with the 44’s. Halfway through the show I noticed Kim watching me play. I didn’t even know he was on the gig. Anyway, before Kim got up to play he asked me if I wanted to stay onstage with him. I, of course, said YES! After the gig we talked for a bit and became fast friends. Now we are good friends and we play, record, and trade amplifiers all the time. He is a great guy, and the man has given me more advice and opportunities than anyone. Not to mention, I get to steal some of his harp chops every time I see him [laughing].”