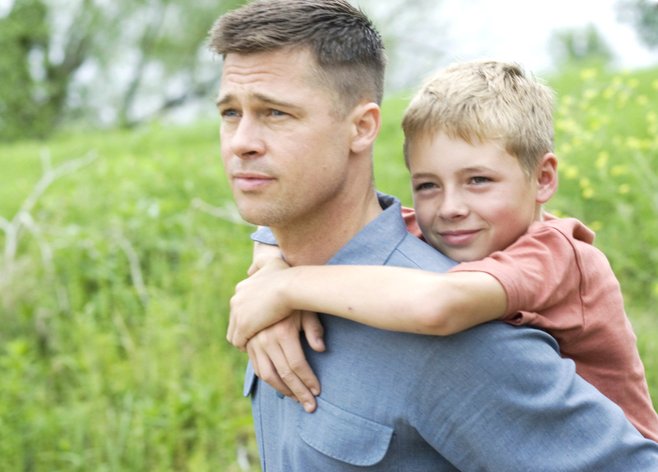 Clutching a chainsaw, we visit a big, beautiful tree:

The Tree of Life

In 38 years, Terrence Malick has directed only five feature films. Even Stanley Kubrick, the Great Oz of take-it-slow cinema, achieved eight in his last 38. For all of his vaulting ambition, Kubrick never fell into making a movie called The Tree of Life. And in 2001: A Space Odyssey, his stellar embrace of nothing less than the universe, Kubrick limited the family stuff to a charming cameo by a little girl (his daughter).

In Tree, Malick wraps big images and symbols of space, nature, evolution, divinity, destiny, and death around a lower-middle-class family in Texas. The core source is Malick’s boyhood in the 1950s, and at the center of that is a painful loss. Sadly but blatantly, the gaseous inflation of themes virtually destroys anything personal or profound. Malick has become not a Kubrick, but another Stanley Kramer — the Hollywood producer and director whose message-films were like burritos stuffed with significance. Or rather, he is like Kramer with some visual flair.

What can you say about a movie that starts with a Bible quote from Job, then moves on to eye-popper vistas of stars, waves, bloodstreams, jellyfish, lightning, lava blasts, even CGI dinosaurs, all the while underscoring the importance of it with music by Bach, Berlioz, Ligeti, and the reverently lush soundtrack of Alexandre Desplat? Well, that it also provides tiny cries from the heart, akin to the murmuring angel thoughts in Wim Wenders’s Wings of Desire. And that it puts Brad Pitt at a church organ, playing the same lofty toccata used by Fellini for a scene in La Dolce Vita.

Away from the organ, Pitt as Mr. O’Brien is an increasingly angry father in Waco. Stymied at work as an engineer, he becomes a tough-love patriarch, rigidly pious about his rules. His pretty wife (Jessica Chastain) is an angelic vessel of the maternal, rarely complaining, mostly observing — like Wenders’s Berlin angels. These people barely have names, and they speak almost entirely in small peeps of revelation. A family tragedy does not bring much articulation.

Tree could be the bloated love child of Places in the Heart, but that soaper had some great acting. It must be the most pompous movie made in Texas since Giant, but that saga was entertainingly excessive. Here, the only character to become more than a refrigerator-magnet of symbolism is the oldest boy, Jack, a bright child who becomes sullen, angry, and miserable around his dad. Hunter McCracken is moving, yet Malick treats acting as if it were a minor servant of his vision (Sean Penn appears, just barely, as the grown Jack).

Some brief, lucid images may hit you like personal memories rising from oblivion: a kid’s ball bouncing off a roof, the stifling force of a needy hug, the shock of cold pond water, children being hurried away from someone having an epileptic seizure. But the intimacy is stamped “generic: handle with piety.” More solemn than any Malick text before (which is really saying something), the script is like a dreamy slide show inspired by Norman Rockwell covers, the fabled Family of Man photo exhibit, TV dramas, IMAX nature films, sermons, greeting cards, and National Geographic specials.

The Tree of Life strains so hard for the Big Picture that it suffers a soul hernia. Some viewers may relish the head-trip visuals, but nobody will attend for the absent humor (devouring ’50s magazines, Malick seems to have missed Mad entirely). If people are moved, it may be because the movie exploits clichés already implanted as Pavlovian triggers in our soft heads by countless commercials. Probably few of the earnest blog debates will recall that Alain Resnais handled similar epic themes with wit, insight, and intimacy in 1980’s Mon oncle d’Amérique. 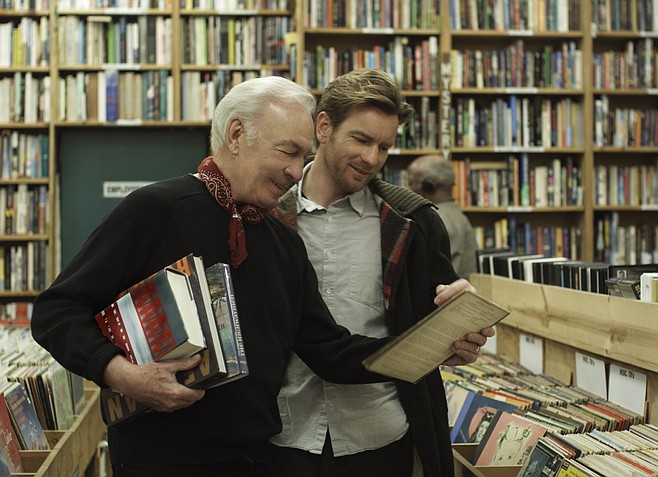 This is a split review. On the downside are the cute, facile touches that director-writer Mike Mills has used to background and flesh out Beginners: old file clips, drawings, generic flashbacks, meet-cutes, vintage music (Hoagy Carmichael, Jelly Roll Morton). This must be where Nora Ephron flirts with Woody Allen and winks at Michel Gondry. Mills even includes subtitles to offer us thoughts from the movie’s mascot dog, Arthur.

Still, the frisky Jack Russell terrier may be the most adorable movie pooch since the Bogart-loving Pard in High Sierra (1941). His new owner, L.A. graphic artist Oliver, is played by utterly credible Ewan McGregor. Arthur’s former owner was Oliver’s dad, Hal, whose last years with cancer are spelled out with honest if not clinical candor — and Christopher Plummer remains a great actor. When his wife died after 44 years of conflicted but not loveless marriage, Hal came out as gay, found a younger lover (Goran Visnjic), then died.

Picking up the pieces of that productive-but-fractured life, and his own, Oliver is helped by true romance. The beautiful French actress Anna (Mélanie Laurent, who at moments seems much like Nastassja Kinski) is used to independent living, and she isn’t sure about taking on Oliver’s baggage. True, he is charming, tender, funny, and he has Arthur. He once had a sharp-but-repressed mother, incisively played in memory vignettes by the excellent Mary Page Keller.

Similar emotional material was more forcefully treated in The Sum of Us, an Aussie film about a gay son (Russell Crowe) and his macho but then progressive dad (Jack Thompson). The garnishings, such as clips of martyred Harvey Milk, come across as decals and inserts. Still, for all the doodads, Mills and his cast often give the story a living pulse, a sense of something genuine at stake. And it has Arthur. Opens June 17.

The full title for the restored reissue is Nuremberg: Its Lesson for Today (the Schulberg/Waletzky Restoration). That sounds dry, pedantic, archival. And yet, Nuremberg, made from 1945 to ’47 but never widely seen, brings to us the most important of international tribunals. This is the official film of the postwar trial of the Nazi leaders, men who had — not far away — paraded in pomp at the infamous Nuremberg rallies (one of which became art, of a kind, in Leni Riefenstahl’s Triumph of the Will).

Bereft of their dead Führer and Dr. Goebbels, the accused included suave “visionary” Albert Speer, air-marshal and art-pillager Hermann Goering (who looks guiltlessly bored by the crushing evidence of infamy), and odious Hans Frank, the chief tormentor of Poland (his mousey apology is a jaw-dropper). Most of the accused would be hung. Others (like Speer) got long prison terms, but how do you really punish people who so gladly constructed hell?

The film’s hero is the main American prosecutor, stern and eloquent Justice Robert H. Jackson. Its added value, beyond the trial scenes, is a powerful torrent of images about the Nazi rise, their serial crimes, their systematic “logic” of sadism. Designed to answer the staggering questions, “What happened, and why?” the movie does a searingly credible job, though the Holocaust is short-served (the full impact of that tragedy would take time to seep in, and films are still struggling with it).

Made by producer Pare Lorentz’s team, notably Sgt. Stuart Schulberg (brother of the famous Budd), the movie was shown in Germany but never released in America. This restoration of a German archival print was produced by Sandra Schulberg, Stuart’s daughter, and Josh Waletzky. As narrated by Liev Schreiber, this piercing testament has none of the stark humor found in writer Malcolm Muggeridge’s diary for March 19, 1946:

“Goering said under cross-examination at Nuremberg that he was sorry about the burning down of the Reichstag because he had to requisition the Kroll Opera House as alternative accommodation, and he regarded opera as in every respect a superior enterprise to the Reichstag.”

Reviewed in the listings: Judy Moody and the Not Bummer Summer, Meet Monica Velour, and X-Men: First Class.

I have been waiting two weeks to be able to comment on "Tree of Life." First of all, I was totally misled by the incredibly elegiac review of A.O. Scott from the New York Times who was clearly smoking something when he wrote the piece. But I am interested in Terrence Malick, so I went asap to the Landmark Hillcrest after the film opened.

Unfortunately, Terrence Malick seems to be on a downward path. His previous film, "The New World," from a few years ago, was only tolerable because one wondered what he'd been up to after a long hiatus. Now, "Tree of Life" appears and it is self-indulgent, awful, verging on funny.

In the first half-hour, fully a dozen citizens got up from their seats in the dark and left the theater, never to return. A bad sign.

The photography is beautiful, especially the flat old neighborhoods of Austin TX where it was filmed -- clapboard houses with open windows and porches, wide lawns and big trees, summertime. But there are inaudible questions in voice-over whispers, a prototypical lovey mom and a more-nuanced often-mean dad, three little boys who are brothers, one portrayed as a rebel.

At the end, when you have waited to read the credits, they are illegibly small, except for the words "Written and Directed by Terrence Malick."For a collaborative medium like film, this was the last straw for me.

Clearly the movie is intended to be autobiographical, maybe a summing-up for Malick who is in his 60's. I hope it was cathartic for him. But I was very disappointed and felt like a sucker for buying the amazing Palme d'Or hype.