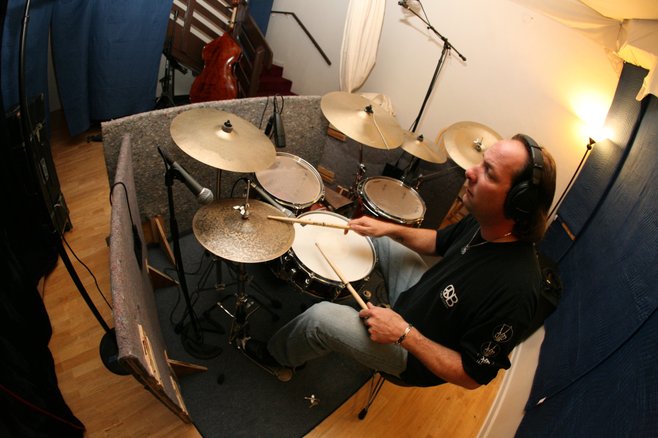 Ray posts solo drum tracks at BillRayDrums.com, inviting others to download and create their own songs around his beats.

“Neil MacPherson has been creating melodies and lines to some tracks,” says Ray. “Smooth-jazz guy Bill Cornish turned in a tune, and Dog Plays Bass from Craigslist sent one along. A guy in Austria sent back a death-metal version to one of my tracks. I’m waiting for the gangsta rappers to start sending me squished, remixed, and tripped-out versions.”

He gives away the drum tracks for free. “There’s no way anyone can keep a lid on digital media anymore. You might as well go in prepared to give it away and hope that somehow good things come around.”

As to his motivation, Ray says, “I’m an artist, and these are my paintings. Use them as you see fit. I draw lines around musical shapes and expect others to color in the parts. Ultimately, they are there for collaborating, songwriting tools, looping, and remixing. The main goal is to get people hooked on my feel during songwriting sessions. Then they may be compelled to call me for their studio work.”

Earlier this year, Ray left for Paris, France, to promote his sponsorship for Supernatural Cymbals, which manufactures handcrafted Turkish cymbals out of Istanbul. From there, he toured Holland in March with soul trumpet player Ernest Lane. He’ll spend July touring with local Sublime tribute band 40 Oz. to Freedom.

1) Chris Carpenter, Knock Knock. “I’m learning his catalog and will end up playing some dates with him.”

EVER BEEN INJURED ONSTAGE?

“At Viejas, in the Dreamcatcher Showroom, I stepped down through one of those little cable holes that open up to underneath the stage, and the little door flap zipped open my right shin. Paramedics came and bandaged me up, and I managed to play all night on my sliced-up leg. After the gig, I stopped at the ER in El Cajon and got eight stitches.”

BEST DAY OF THE WEEK?

“I like Mondays, because I’ve engineered my life to make Monday my day off.”

IF YOU COULD TIME TRAVEL, WHEN/WHERE WOULD YOU VACATION?

“I’d go back to the Renaissance and tell some futuristic secrets, and — just as they were burning me at the stake for heresy — I’d be, like, ‘poof’ and be gone. The legend would live on for centuries!”

“Dr. John, at Montreux Jazz Fest in 2002. We were on the road with Ike Turner and had the night off. We rolled up into Stravinsky Hall and ended up at the side of the stage, about ten feet from the man himself.”

“I had a pseudonym in my formative years in Mississippi. I suppose it had something to do with wanting to escape from the doldrums that was Jackson in the late 1980s.”

“I was 15 years old in Jackson, Mississippi, with a bottle of Cuervo, in a darkened closet between two speakers, while Metallica’s Ride the Lightning was piped into my head at about 110 db. I almost joined the 27 Club [musicians who died at age 27], as my sister and her friends found me retching my lunch. Because I slept on a bare waterbed mattress for the remainder of the drunk, which was like sleeping on an iceberg, the hangover wasn’t too bad the next day.”

ANY FEARS OR PHOBIAS?

“I cannot stand cotton balls! They make my skin crawl. When I open the top of a bottle of aspirin, I have to pull out my Leatherman tool and deftly extract that white glob of fibrous voodoo and get it away from me, before the gooseflesh hits.”

1) “I was raised on gospel music by a black Creole woman in Mississippi.”

2) “I once wanted to be a heavy-equipment operator.”

3) “I’ve managed to find an outlet for both my ADD and OCD, without the assistance of pharmaceuticals.” ■

WHO IN YOUR FAMILY DO YOU TAKE AFTER? “Probably my father, because he’s one of those guys who just gets stuff done. One morning, he was working in his yard and felt a sting on his foot. Rather than stop to tend to a bee sting, he powered through to the evening. When he took off his boot, his foot was swollen up and there were two small fang marks. He’d been bitten by a water moccasin snake.”

EVER BEEN FIRED? “Many times from many jobs and bands. Sometimes, conformity isn’t the best thing for a person’s inner will, at least if they’re on their own path. If I see something circling the drain, usually I’ll get off before someone else flushes.”

WHAT REMAINS ON YOUR BUCKET LIST? “I’d rather hitchhike across Russia than not see it at all.”