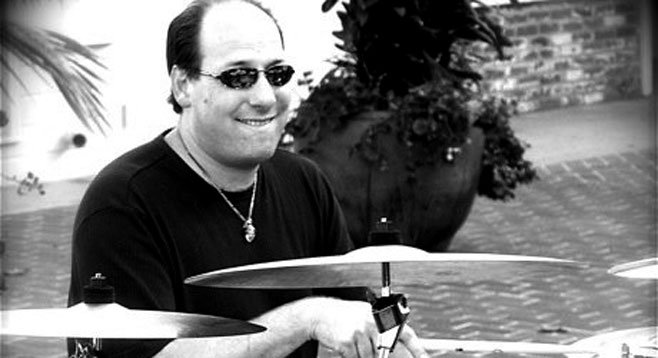 Get the Hell Out

When the Art Institute of San Diego needed a guest with pro music experience to speak to one of their audio production classes on the subject of freelancing in the music business, they tapped Bill Ray, also known as Bill Ray Drums. “I talked about how I’ve done it all these years. And, pretty much,” he says, “I’ve done it the wrong way.”

The Art Institute of California at San Diego, on Mission Valley Road, bills itself as a “design, media arts, and culinary arts post-secondary school providing bachelor’s and associate’s degrees,” with disciplines ranging from advertising and audio production to culinary arts and fashion marketing.

So how, in the Bill Ray scheme of things, does one succeed in the business of music? “The first thing out of my mouth was, ‘You’ve got to get the hell out of San Diego. This is a vacation spot. And, there are so many bands and musicians here that club owners can be opportunistic.’” He talks about a local venue nixing comp drinks for musicians. “They wanted to charge me for an iced tea. I said, ‘What, ice costs you that much? Then how about I just play drums with only one arm?’”

Bill Ray is 43 and lives in Ocean Beach. A veteran drummer born in Jackson, Mississippi, Ray also works a side job in web development and writes articles for Not So Modern Drummer magazine. But if Ray has freelanced the wrong way all these years, what, then, is the right way to be successful as a hired gun in the music industry?

“I basically told them the devil’s in the details. What’s on paper...what sort of agreements you’ve forged. I’ve played on over 150 albums,” including Ike Turner’s 2007 Grammy-award-winning Risin’ with the Blues. “And almost none of them,” admits Ray, “were paperwork-documented. Most of the time, I worked like Hal Blaine and the Wrecking Crew,” meaning work-for-hire situations that pay a session fee but zero royalties. “You need to look at all the other aspects, like publishing. In the end, who’s making out with the cash?”