Matthew: If we can run our cars on recycled oil from french fries and stuff like that, why can’t we use recycled fat sucked out of people’s guts? Or maybe we already do. How about this idea? Where does that stuff go, anyway? Is it workable if I make a deal with some doctor to take the extra fat off his ­hands? — The Fat Man, via email 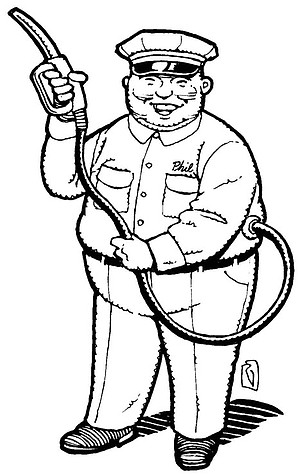 Pretty original idea, running your car on somebody’s old thigh fat. Unfortunately, a radiologist-turned-cosmetic surgeon beat you to it. For years he tooted around Beverly Hills in his big SUV powered with liposuction fat. Some people make moonshine in their bathtubs, this guy made “lipodiesel” (as he called it) somewhere in his clinic. He never did disclose where or how. It so happens that it’s illegal in the U.S. to make fuel from medical waste. But that wasn’t his only problem. He’d trained his girlfriend to suck fat, but she wasn’t licensed and also wasn’t very good at it, because they were up to their slim hips in lawsuits. Doc said what he did was liposculpting, a specialty she was trained in, but girlfriend seems to have gotten an F in art. His clinic is now closed and he’s disappeared. Rumor has it he’s in Bogotá, Colombia, perhaps sucking fat there now.

I know all this must come as a shock and disappointment, Fat Man. Especially if you were banking on lipogas as your ticket to Rancho Santa Fe. But keep at it. Maybe you’ll come up with a winner. Here’s a summary of things people have already squeezed fuel out of, so you don’t waste time on a dead-end ­idea.

The British have developed a fuel that is 30 percent biodiesel derived from bad batches of chocolate from a nearby candy factory. Entrepreneurs in Missouri get fuel from mashed turkey guts and feathers. They’re also working on a light crude made from onions and Parmesan cheese rinds. The University of Nevada has a simple process for extracting fuel from coffee grounds; in a companion study, U Mass added 5 percent polystyrene coffee cups to fuel and had a hit, apparently. But leave it to the Canadians to come up with the best idea: gas and oil from disposable diapers, including the poop. Stick that in your ­Lexus.

Hey, Matt: Growing up, the thing my father said most to me and my brothers was, “Pipe down!” He meant shut up and stop making so much noise. Where did that expression come ­from? — Roger Thompson, via email

Okay, imagine you, your brothers, and a bunch of your friends are slaving away on the deck of a ship. One of the guys in charge is the boatswain (bosun). He’s got a little high-pitched pipe that he plays to give the rest of you your working instructions. He blows a certain pattern of notes and you know it’s time for lunch, f’rinstance. So, you’ve been working all day on deck, and the boatswain pipes that it’s time to quit for the day, go below decks, and chill out. In sailor parlance, he has piped you down. Not hard to see how “pipe down” would come to mean “quiet down.” It was just sailor talk until the late 1800s, when the rest of us picked it up.

On Medical Advice from Dr. Alice

Your comment [two weeks ago] on seawater [healing] wounds was good if you live in an area with clean water. San Diego maybe not so much. MRSA has been found in many beaches; all sorts of nasties can be found in seawater. Stream drainages are polluted with human and pet waste and down littoral current from a lagoon might be pretty ­lively. Seawater has a variety of bacteria that do not respond to conventionally used antibiotics. So [wound healing], not too dangerous in clean seawater, but in contaminated water, not recommended. Used to surf at the “sewers” in Santa Cruz and don’t think it did me any good. — David ­Bainbridge

Hey, Matt: It might be a good idea to advise people planning to treat cuts with saltwater to make it at home where you know the water is clean. I lived in Hawaii for many years, and pollution from sewage in the ocean water was the source of the majority of staph infections that often take months to cure. — Don