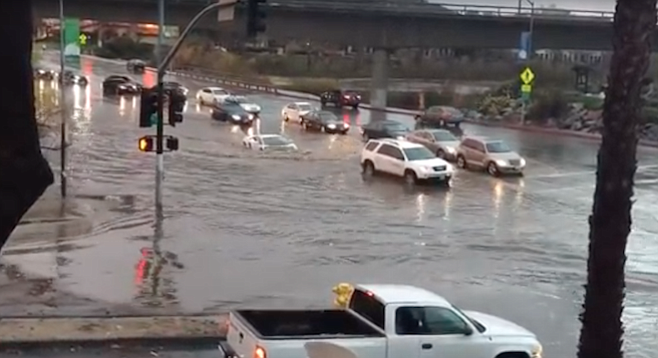 “That vehicle is built for speed, that is something you would not use in this kind of water,” said Emilio Ramirez of the San Diego Police Department.

Ramirez was referring to the white Lamborghini on social media this week, which crossed a San Diego intersection with flood water almost as high as its windshield. (The video has since been taken down.)

Some other San Diego race cars and their drivers haven’t been so lucky.

“My buddy hydrolocked his engine going through a puddle,” said “Juan,” a Chula Vistan who builds Volkswagens that can allegedly go heads-up against the $200,000 Lamborghini Gallardo, but only on dry days.

Juan said he and his buddy built a fast 2001 Volkswagen GTi with all the bells and whistles. When test-driving the car, peaking the turbo-boost, they drove through a big puddle and their air-intake took in water. The water wasn’t nearly as deep as the Lamborghini’s, but this VW sported an aftermarket cold-air-intake pipe that was at bumper level (low). This modification is popular for street racers because the pipe sucks in cooler and more air, compared to the restrictive, factory air box within the hot engine compartment.

“It’s gonna be a costly repair,” Ramirez said. “The first thing they have to do is take off the [engine] head because now they have water that is trapped inside there, and that has to be removed.”

Removing the water inside the head is one thing that can be remedied, but the Volkswagen fix wasn’t so easy: the water fouled up the air and fuel mixture, making the head lock up, bending internal parts and seizing the complete motor mechanism.

But, Juan had a work-around for that: “We swapped out the [after-market] intake and installed his factory air box back, got it a bit wet and added a little bit of debris in it before putting it back in,” Juan said. “The insurance company came to see it, looked at my written report on [the] damage, and he got paid for a complete used engine including labor and fluids needed.”

The reason why the Lamborghini was able to pass through the deep water and not bog down due to hydrolock was partially because the 500-horsepower engine is behind the seats and its air intake is located higher up.

You should get a trophy for Dumbass of Year. Do you work for the city?

Insurance fraud documented in a story published in a weekly... this is stupid. And the insurance company will figure this out.