Along the canyon walls of Anza-Borrego's Arroyo Tapiado ("Mudwall Wash"), weathering and erosion acting on friable sedimentary rock have produced a strange kind of topography known by some geologists as pseudokarst. Like karst topography, which is associated with limestone caverns and sinkholes, this pseudokarst landscape contains caves, subterranean drainage systems, and strange "blind valleys" that end in "swallow holes." Unlike karst, which results from the dissolution of limestone or similar material by water, pseudokarst is thought to be the result of the following unusual series of steps: First, flood waters gouge out slotlike tributaries in the soft claystone walls of the main arroyo (Arroyo Tapiado). Second, landslides fill in the slots. Third, flood waters dig tunnels through the bottom levels of the landslide debris.

Arroyo Tapiado is the best known of several similar pseudokarst sites spread throughout the Carrizo Badlands and Coyote Mountains of southernmost Anza-Borrego Desert State Park and western Imperial County. It is still quite remote, however. The way in includes several miles of sandy roads, best negotiated by 4-wheel-drive vehicles.

To reach the starting point, drive northwest from I-8 at Ocotillo along County Highway S-2 to the signed Palm Spring turnoff near mile marker 43.0. Proceed east down the broad Vallecito Wash, staying in the main wash when the spur road to Palm Spring forks left. At 4.5 miles from S-2, a small sign on the left marks Arroyo Tapiado, a broad, shallow, and uninteresting drainage at this point. About two miles up the wash, however, the canyon walls begin to soar. The strangepseudokarst topography is first evident here, and it continues for at least two more miles up-canyon.

Some of the caves (subterranean stream channels) in the area are over 1000 feet long. Some have multiple levels, and one contains a 45-foot subterranean "dry fall" within a chamber some 30 feet wide and 50 feet high. Sinkholes (skylights) illuminate the interiors of some caves. Most of the cave passages eventually lead upstream through a swallow hole (a spot where water, if it were flowing, would disappear underground). The cave entrances are mostly obscure, but one -- the "Big Mud Cave" with a roof like Swiss cheese -- is hard to miss.

Although the caves here are increasingly popular, the wisdom of entering them is debatable. Heavy rains and earthquakes in recent years have brought down considerable debris onto some of the cave floors, though apparently no one has witnessed these events happening in real time. It is rewarding just to stroll down the most dramatic, one-mile-long stretch of the main Arroyo Tapiado canyon bottom, scoping out all the amazing things rare flash floods can do to a normally desiccated and nearly barren landscape. Near the south end of that interesting stretch, a wide tributary ravine heads west and splits into many small branches that worm their way deep into the soft sediments -- worth investigating if you are curious.

This article contains information about a publicly owned recreation or wilderness area. Trails and pathways are not necessarily marked. Conditions can change rapidly. Hikers should be properly equipped and have safety and navigational skills. The Reader and Jerry Schad assume no responsibility for any detrimental experience. 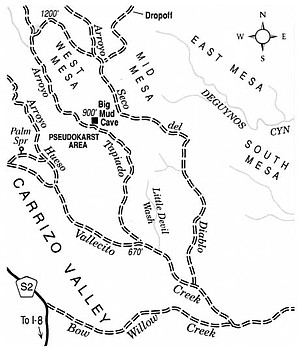