Hike the Ben Overturff Trail in Monrovia Canyon Park, and visit the site of a long-abandoned resort in the San Gabriel Mountains.

Monrovia Canyon Park rests serenely in a sheltered corner of the San Gabriel Mountains, just upslope from the stately foothill community of Monrovia. Nearly three years ago in this column (April 6, 2000), I wrote about Monrovia Canyon Falls, the park's most attractive feature. This present column covers the park's other outstanding trek, a seven-mile (round-trip) hike up the drainage of Sawpit Canyon to Deer Park, the site of a tourist lodge popular during the early 20th Century. There you'll see the remains of a stone lodge built by Monrovia building contractor Ben Overturff in 1911. Torrential rainfall in 1938 wiped out large sections of Overturff's access trail to the lodge, and by 1948 the lodge and the trail were abandoned and nearly forgotten. Not until the 1990s would the access trail again come into use. By this time the entire area had become a Monrovia city park. For variety, it's best to follow what remains of the old Overturff Trail to the lodge and return by way of a newer fire road. To get to the park use the northern extension of Canyon Boulevard in Monrovia, go through the entrance (pay a small fee there), and park in the first lot or turnout where space is available. About 200 yards uphill from the park entrance, the gated Monrovia Canyon Road going up Sawpit Canyon veers right. Walk uphill on this road (paved initially), climbing on zigzags to a point overlooking the small Sawpit dam and reservoir. Pavement ends and you continue climbing, more moderately now, past a turnoff for a Boy Scout reservation (1.3 miles) to a very sharp hairpin turn to the left (1.7 miles), where a sign announces "Overturff Junction." At that junction start descending into the ravine on the left using the narrow Ben Overturff Trail. You now experience a terrific two-mile stretch of trail densely shaded by live oaks and mature chaparral, sometimes so thick that it forms a closed canopy overhead. About halfway through the stretch, the trail delicately threads a narrow ridge known as "Razorback." Three fourths of the way through, you traverse a soggy, oak-shaded draw known as Twin Springs Canyon, passing a spur trail on the right leading over to the nearby fire road. Up and over the next ridge, you come to a second trail junction. Go left and hike the final 0.1 mile to the stone cabin ruins at Deer Park. It's hard to believe this serene site was once teeming with tourists. When you return to the second junction, take the other branch (go left) to reach the edge of the fire road, where a restroom is available. From this point on, follow the fire road all the way back -- 3.2 miles of easy walking. On the return, you'll pass a Monrovia Police shooting range. Target practice occurs here on Tuesdays and Wednesdays; therefore, the Overturff Trail and the fire road are closed to the public on those days. 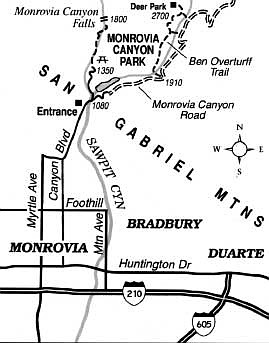