A year in the death of a doomed enterprise... 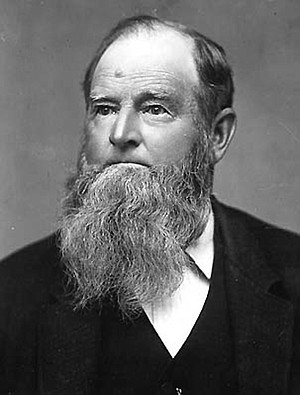 In 1850, people poured into California, greedy for gold. Fortunes bulged. All of this led to planning on a grandiose scale. Entrepreneurs envisioned cities on bare patches of dirt — or better sites for what already existed. Several prominent San Franciscans, for example, wanted to move the entire city across the bay to Benicia, which had superior potential for a harbor. William Heath Davis (1822–1909), one of San Francisco’s founders, refused. “They wanted me to give up the city that I had assisted to build from its infancy and to establish my large business at Benicia, which was something I could not accede to.” And yet Davis attempted a similar relocation of San Diego.

On the suggestion of boundary surveyor Andrew B. Gray, in March 1850, Davis founded “New” San Diego on 160 acres next to the bay. But Davis was years ahead of his time — 15, to be exact.

From west of today’s Front Street and south of Broadway, down to the water, Davis and associates built a 600-foot L-shaped wharf, warehouses, two hotels, saloons, prefabricated houses, and Pantoja Park — a public square to remain “forever free” to all citizens (now surrounded by a condo complex). They convinced the Army to build its twoand-a-half–story barracks in New Town. They had a jail and a newspaper. By the summer of 1851, ships coming into San Diego Bay saw a brown skyline where a year earlier jackrabbits roamed.

Davis and Gray asked questions that today are out of reach. How do you build a city fro scratch? What makes it grow? They knew they had a splendid natural harbor. Gray, who platted the streets and sounded the bay, hoped that the transcontinental railroad would end at New Town. But when San Diego held its first county election on April 1, 1850, 157 males voted. New Town needed people.

Gray went to Washington, D.C. He sang New Town’s praises, its weather being superior to “San Francisco’s disagreeable season.” He also lobbied for a post office — mail steamers still docked at La Playa — and a custom house. “Headstrong and not on easy terms with his colleagues” (Harlow), the taciturn Gray wrote an elated letter to Davis, predicting “a lovely...flourishing and beautiful town.” Gray also urged Davis to “attach to your wharf — where it passes over the sand pit — a bathing house for ladies and gentlemen...a great attraction and profitable also.”

Even though 70 citizens petitioned for one, New Town didn’t get a post office. Or a custom house. And ships in the harbor were few, as were settlers. San Diego, New and Old, was a scruffy outpost with little to offer. “There was no industry,” writes Ed Scott, “and because of the vast Mexican land grants and the city’s own Pueblo lands, there simply was no land open for homesteaders.” In 1851, Scott adds, “New Town was busy around the depot and wharf, but there were only 15 or 20 men employed by the Quartermaster Corps, and most of the soldiers bought their liquor and tobacco at Old Town, which was closer to the Mission camp, so there was not much business for the little stores at New Town.”

Davis, who still lived in San Francisco, visited New Town occasionally. An affable man who always looked for positives, Davis was better at big pictures than details. His hotel, Pantoja House, charged “San Francisco prices,” which sent frugal boarders to Slak and Morse’s nearby Boston House. He paid excessive taxes that he could have contested. And his saloon and billiard room served “fine wines” and quality whiskey. William P. Toler, bar-keep at Pantoja House and New San Diego’s first justice of the peace, complained in a letter, “There is no business...even if a few visitors from [San Francisco] come down this winter, they will cause a reaction in the bar rooms.” Toler added, “The [Army] officers prefer drinking at home...and the soldiers would rather pay only...for bad liquor.”

After a visit to the site, a ship captain urged Davis, “Get water, get water and your place is made!” The original harbor at La Playa had no fresh water. New Town’s was brackish, with a high saline content. Davis knew that San Diego’s average “[rain]fall...was nine inches” — same as today — but assumed that gutters on the eaves of roofs, and barrels and cisterns below, would catch enough rainwater.

They didn’t. Some new San Diegans dug wells, at great expense. Davis drilled one that gave Broadway its first name, Spring Street. Another attempt dug down 52 feet. Drillers found “good water” up to 26 feet but kept going to produce an “artesian” effect — water rising to the surface under pressure. “They never brought in the artesian flow they hoped for,” wrote Ed Scott, “and the project was dropped. There was good water under New Town after all, if the first drillers had not stubbornly insisted that the well be artesian.”

One of the few enterprises that flourished was Tasker & Hoke’s horsedrawn water tank. It made frequent trips to the San Diego River and charged hefty prices for its contents. New Town’s livestock, which had to make a daily three-mile journey to the river, often trailed behind T&H’s cash cow.

The old shoreline was another problem. It stood just east of Pacific Highway at Broadway and during high tide submerged half the town under water.

While Gray sung its praises back east, New Town ’s image took a national blow when Antonio Garra led a brief rebellion against white settlers in San Diego County. According to the San Diego Herald, the arrival of the “Hounds” — notorious thugs masquerading as peacekeepers — infested the region with “rowdies, adventurers, and drifters” who, on one occasion, “stoned a poor Indian” to death.

Even when authorities shipped the Hounds out of San Diego, the new harbor had little to recommend it. John Bartlett, of the U.S. Boundary Commission, observed early in 1852, “There is no business to bring vessels here, except an occasional one with government stores. There is no water nearer than the San Diego River...wood has to be brought some eight or ten miles; nor is there any arable land within four miles.” Davis came to California in 1831. He made millions as a trader and saw such incredible growth he assumed it would continue. His bi ographer, Andrew F. Rolle, writes: “Had he continued to pay serious attention to the merchandising and trading...he might have kept his wealth. But he could not seem to realize his limitations nor recognize his real forte. While he was suited to the pastoral life that had existed in California before the conquest, he did not seem fully able to cope with the new society.... Because he refused to accept the role of small businessman and trader, much of the remainder of his life was one of frustration.”

In 1850, Davis owned 150 lots in New Town. By 1871, he had 22. The population peaked at 250 during the summer of 1851. Bu t there was little to keep them there, even though Davis spent a fortune trying. “All the funds I have drawn from the store and other sources,” he wrote from San Francisco, “have been eaten up in the expenses of the town.... We meet with much opposition from the inhabitants of the old town and beach [La Playa] — they make every effort in the world to crush us. I am on my back and unwell.”

Scott calls Davis the “ever-absent” founder of Ne w Town, since he was rarely there. Rolle agrees: “His indefiniteness in handling San Diego investments possibly contributed to his failure. His agents complained that he failed to give them sufficient authority to act in his interest, in spite of their on-the-spot residence.”

Six fires hit San Francisco in 1851. One burned Davis’s “emporium” to the ground. He lost an estimated $700,000 and circled his financial wagons, sending no more funds south. Slowly, the citizens of New Town made an exodus, either selling their property or leaving it behind. Many moved their buildings to Old Town.

In September 1851, the San Francisco Alta California called Davis’s venture “a most disastrous speculation, an immense amount having been sunk in the operation.” By that time locals — especially Old Towners hoping it would fail — joked that Ne w Town was “Davis’s Folly.” Remaining structures began to disappear. Outhouses vanished first. Then parts of buildings — eaves, window sashes, fences, then doors — were carried off; then the exposed frames, board by board. All became firewood. Scavengers picked at the town like vultures at a carcass. Squatters took up residence in run-down abodes. Weeds grew back, blurring the lines of streets.

In 1853 the steamer Los Angeles slammed into Davis’s wharf, taking out the last 30 feet — where ships of “deep draft” could lie. Davis never repaired the damage, and the few ships that came to the area anchored way offshore. Two other steamers, Sea Bird and Goliath, wrecked other parts of the wharf.

By the late 1850s a “Mr. Comstock” offered $25,000 for the whole of New Town. Davis refused, even though few structures remained. “By his refusal of such sums,” writes Rolle, “Davis lost the opportunity to get rid of a financial millstone at a time when the wharf ’s piles were so brittle they were snapping like pipe stems.’ He seemed to be refusing to admit a defeat already in existence despite the fact that the San Diego enterprise was draining away his savings.”

Andrew Gray returned to New Town on occasion but settled in Tucson. During the Civil War, as a Confederate army engineer, he died in a riverboat explosion on the Mississippi.

In 1867, G.A. Pendleton wrote to Davis: “The building in which Hooper kept store has long since disappeared, and you are indebted to the California Volunteers for appropriating it to their own use.... Pantoja House shared the same fate at the hands of these miserable specimens of humanity in Uncle Sam’s uniform who enlisted because they were too lazy to work.”

Even though the enterprise exhausted his finances — after years of litigation, the government awarded him only $6000 in damages, barely enough to pa y lawyers’ fees — Davis never let go of his new town. He blamed the Civil War for depleting the area of soldiers and refuted Alonzo E. Horton’s claim as the city’s true founder.

Far-seeing to the end, Davis tried to start a city at present-day Oakland (he wanted to create a “Brooklyn for San Francisco”) and eventually founded San Leandro. Rolle: “In some respects Davis deserves more credit than he received. [History forgets] the sacrifices by town builders like Davis who, too early for their ow n benefit, tried to create order out of confusion.... In a remote corner of the United States his experiment, though patently unsuccessful, forms a part of the largely unwritten history of the American West.”

to mark them as tomb-marks of those deceased early explorers of the Pacific Ocean...”