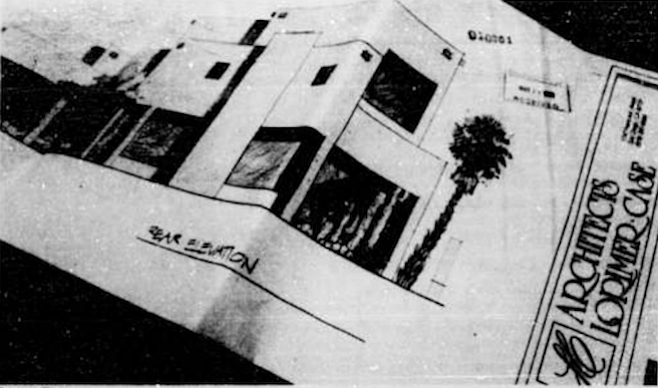 The design of the mayor's new home, influenced by Desert Storm

Mayor Maureen O'Connor and her husband Robert O. Peterson took plenty of heat early last month after it was revealed that the city's First Couple was also one of its heaviest water users. The story got even bigger when city water utilities chief Milon Mills admitted that Peterson and O'Connor actually used two meters, boosting their consumption to previously unreported levels. With public attention fixed on the Peterson mansion at the top of Point Loma, a helicopter belonging to Channel 10 was dispatched to hover low over the estate, showing viewers a verdant expanse of lawn, exotic trees, flowers, shrubbery, an ornamental pond for Japanese carp, and an Olympic-size swimming pool. Other television reporters clamored at the front gate, seeking details of the various water-thirsty plant and animal species dwelling within.

With the easing of the drought, interest in O'Connor's gardening habits has diminished, but she and her husband aren't leaving water conservation to chance at a home they are preparing to build near the San Diego Yacht Club, in Point Loma. According to landscape plans on file with the city, the most predominant feature of the home's front entry will be a towering, multi-armed saguaro cactus. Two drought-resistant strawberry trees and four desert-hardened Mexican palo verde trees will flank the saguaro. Agaves, ocotillo plants, and small yucca trees are the only shrubbery, and the arid motif will also be repeated on the back deck, where four Mexican fan palms are planned.

In fact, the entire 5500-square-foot house of contemporary design appears to be an homage to the adobes of New Mexico. Plans call for the exterior to be crafted in "hand-trowelled" mauve stucco, with doors and shutters of sandblasted wood coated by "transparent brown stain." Instead of lawn or other traditional ground cover, most of the outside areas will be paved with burgundy-colored slate. Modern touches include glass bricks to admit light while walling out curious neighbors, dual two-car garages, and a 60-foot lap pool with a Jacuzzi.

Water conservation doesn't seem to be as much a priority inside the dwelling. For instance, on the first floor of the two-story structure, there are a total of four full baths with tubs and showers, one each for the housekeeper's bedroom, as well as rooms designated for an office, a den and the master bedroom. In addition, there are two half-baths, one in a powder room near the front entrance and another off the kitchen. The second floor consists only of a large closet and a guest bedroom, which also has its own bath.

Whether Peterson and his wife are planning to live in the new house is not known; he did not return phone calls. But the somewhat reclusive millionaire has taken an unusually direct role in its development. He and an assistant were seen last month in the public records room of the county assessor, personally compiling a list of neighbors required to be notified of the pending construction project under requirements of the state coastal commission.

Based on initial reviews, however, the house seems to be well on its way to approval. The existing dwelling on the lot, which Peterson and O'Connor purchased for about $2 million a few months ago, is a run-down ranch-style modern from the '60s, and its demolition is not expected to be controversial. In addition, the new house is designed to avoid any need for variances or other so-called "discretionary" city approvals, which might create controversy among its Scott Street neighbors.

According to Norman Magneson, chairman of the community planning group for Point Loma, long-time residents near the future Peterson house are especially sensitive to new development. He notes that, as real estate prices have soared, so have the sizes of the lavish new homes that are rapidly replacing more humble original dwellings in the neighborhood. One example was a house being built for developer Morgan Dene Oliver on the same block as the Peterson property. "We went down and fought it because he was trying to put a guest quarters in there," recalls Magneson. "He also had five or six garage doors right on the street. They weren't articulated back, and it looked like a warehouse thing. We also made sure he couldn't put a second kitchen in that place. I know the mayor, and she'd never do anything like that."