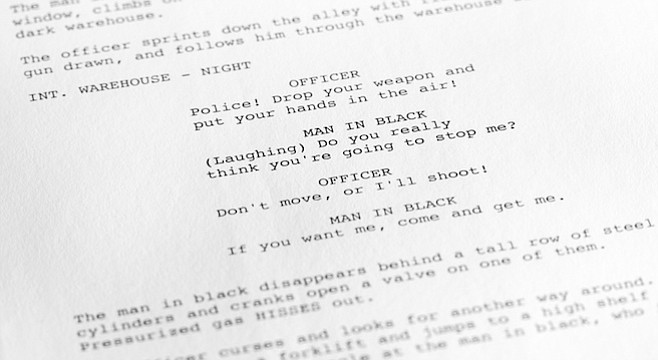 The suspense is gone the second time, but there’s twice as much pleasure.

On summer evenings, I used to pass by the Old Globe Theatre to watch the troupe of college interns perform a half hour of bogus Elizabethan folderol-on-the-green. Though they were awful Elizabethans, the students performed with such bounce that I caught their show as often as I could. Half of them seemed to be having love affairs with the other half, and probably were. Summer internships do wonders for developing future generations of actors.

One evening I spotted Neil Simon among the crowd near the box office. He was with some children and a woman I took to be his wife, standing with his hands in his pockets watching the performance. The sports shirt and sweater, the round glasses surrounded by round face, the Shakespearean pate —it was he, all right, the American middle-class stage comedy industrialist, going unrecognized.

Didn’t anybody know who this was? Why wasn’t the crowd mobbing the dapper dramatist for all he was worth? I felt like running to him and offering my support, as one unrecognized writer to another, shouting. “Neil! Neil Simon! Compadre!” and giving him a warm abrazo and declaring I had read all of his work and had loved it ever since seeing Come Blow Your Horn at Radio City Music Hall with my parents when I was 12.

Then I thought. “Nah, he’s on vacation, down here from Hollywood, probably enjoys being unrecognized, gets a chance to do some people-watching. I’d like to be thronged by readers, but he’s probably sick of it.”

That’s how stupid I am.

If I could go back. I’d like to tell him how much I have enjoyed reading his plays, the thick paperback collections of early work and the later ones in Samuel French actors’ versions for $4.00 each. Reading a play never substitutes for seeing it at its best, but reading Simon’s Chapter Two was a better value than the 15 bucks I paid to see the tired road show from the balcony of the Fox. One of the blessings of my work is that I get to do a lot of pleasure reading, and I have found that anyone with an interest in fiction will find an exceeding amount of value in reading plays.

Steinbeck, who worked hard on technique (too hard, for my taste; he took anatomy at Stanford because he felt that understanding the human body would help him write about it), found after five novels that he still didn’t know enough about story structure and decided to cast his sixth work as a play, then expand it into a novel. Of Mice and Men was such a success that he translated it back into a play that ran to 207 performances on Broadway. Because he wasn’t a name playwright, he suffered George S. Kaufman to help him with the Broadway script. When the San Diego Rep did the show a few years back, it found Steinbeck’s pre-novel version stronger than Kaufman’s, though less tidy.

Tony director Ingmar Bergman works the other way, from novel to script, holing up on an island to write a long prose treatment that he reduces to cinematic scenes. In his introduction to Four Screenplays of Ingmar Bergman (translated by Lars Malstrom and David Kushner), the filmmaker denies any ambition of authorship calls a script nothing more than “a very imperfect technical basis for a film,” has nothing to do with literature. Then his book presents us with four scripts that graze the Nabokovosphere of high artifice.

The scripts — Smiles of a Summer Night, Wild Strawberries, The Seventh Seal, and The Magician - would be a pleasure to read even if they were encumbered with the usual screenplay’s “Cut to:" and other fatuous directions. Instead they read as pure narratives amplified by dialogue. Here is one paragraph in Smiles of a Summer Night; the setting is a theater dressing room: “There is a knock on the door and the wardrobe mistress enters. She brings some articles of clothing. The silk rustles, and from the old woman’s gray arms gushes a cascade of white lace.

All of Bergman’s narration is like that - simple and visual. It is writing that draws attention to itself through relentless understatement. Bergman grumbles about the difficulty of writing but admits that it is useful “for it compels me to prove logically the validity of my ideas," which would be arrogant if his writing weren’t so good. To quote Dizzy Dean, "It ain’t brag-gin’ if you go out and do it."

Dialogue presents a problem for most readers. It’s like sight-reading music, where you have to find the line’s melody and mood in one passing. Even professional actors need to study a scene before they realize what’s going on.

Solution? None. Plays are short enough to allow for re-reading. The suspense is gone the second time, but there’s twice as much pleasure in interpretation once you know where the characters are going. I love Beth Henley’s Crimes of the Heart and remember, on the second reading, how much deeper I got into the speech of Babe Botrelle, the youngest of the play’s three wacked-out sisters, when she gives her guess as to why their mother committed a double suicide by stringing herself up with the family cat: "She felt so unsure, you know, as to what was coming. It seems the best thing coming up would be angels and lots of singing. But I imagine they have high, scary voices and little gold pointed fingers that are as sharp as blades and you don’t want to meet ’em all alone. You'd be afraid to meet 'em all alone. So it wasn’t like what people were saying about her hating that cat. Fact is, she loved that cat. She needed him with her 'cause she felt so all alone.’’

One book that might help make plays more accessible for pleasure reading is Bernard Grebanier’s Playwrighting, a standard college text. With dead certainty, it sets forth the rules of dramatic structure and shows how to locate the foundation points that most plays span. I particularly liked his definition of melodrama as a play in which the decisive event is stalled to the last possible minute. He points out that almost every movie ever made has been a formulaic melodrama.

England’s Alan Ayckbourn writes comedies about middle-class couples — nothing new there — but he reinvents the form with elaborate stage conceits. Sisterly Feelings, a play about choices, concerns a married and an unmarried sister attracted to the same man. Early on, they flip a coin to settle which of them rides back with him to town. (The action is set on a hillside park.) The play goes one of two ways, depending on which sister wins the flip, and later comes back to the same ending.

Ayckbourn has said the play 's unpredictability gives fits to box office people because they can't tell patrons which of the two versions will be performed on a particular evening. I’ll bet the actors like the coin-toss. If nothing else it would help relieve them of the burden of spontaneity and provide at least one moment in which everyone on stage takes heartfelt interest in the action.

Like Bergman and Simon, Ayckbourn is prolific, having written 42 scripts since 1959. He turned 50 this year. Unlike Simon, he's never had a hit in New York, though he has a pretty nice deal in Scarborough, a beach resort on the North Yorkshire coast where he runs a theater company that produces one of his own new plays every summer.

My wife and I went to Scarborough in September to see Ayckbourn’s latest show and perhaps to meet him. The town is hilly and divided by canyons, with many parks and a loud, junky boardwalk — a combination of La Jolla and Santa Cruz. Ayckbourn’s theater occupies the second floor of a long and narrow brick building next to the railway station. Before the show, I spotted him in the bar adjoining the theater’s restaurant (Shakespearean pate, narrow chin, no glasses), and without giving him an abrazo, I introduced myself and told him how much I’d enjoyed reading his plays, though I’d never seen one. He seemed pleased.

I'm glad we didn’t run into him after the show, which we didn’t like very much. The Revengers’ Comedies is a palindrome of two plays that can be seen in either order: we saw both on the same night. They are about a couple who compact to take revenge on each other’s enemies but instead fall in love, sort of, with their victims. It was almost midnight before the plays were over.

Trudging uphill to our musty room at the Crown, I said I wasn't disappointed with the productions and was glad we’d come, but I didn't doubt either that the plays would be cut some before they got into print and would make good bedtime reading for someone, anywhere.