Martin Ritt moves around more at ease in Pete and Tillie's neighborhood than in Sounder's.

Obviously one of the unavoidable discussion topics, when Pete and Tillie and Sounder are playing ten minutes away from each other along Highway 8, is some sort of attempted assay of Mr. Martin Ritt, since he is coincidentally the director of both, Ritt can be traced back to the bumper crop of directors who came to Hollywood out of a society of Fifties' Golden Age television directors that included names like Frankenheimer and Penn and Lumet and Mulligan. These names were expected to bloom immediately into Kazans and Zinnemanns on the promise of their television work in the Playhouse 90/Studio One/Philco Hour class. Their infallible instinct for critical compliments in the range of "thought-provoking" and "hard-hitting" and "real" carried into their early movie output at least. The landmark year for their simultaneous coming-outs in Hollywood was 1957, which contained debut features about the judicial nuances and humanitarian philosophy which goes on in a jury room (Lumet's 12 Angry Men), about the "where did we fail" woundedness in parents' eyes when their teenager starts behaving like a normal adolescent (Frankenheimer's The Young Stranger), and about the racial fraternity in a RR yard, where Poitier's undisguised message is that "a man is ten feet tall" (Ritt's Edge of the City). Throughout his career, in items such as Hud (with which Ritt became widely, but briefly, acclaimed as second to nobody among the younger generation filmmakers) and Hombre and The Outrage and The Great White Hope, Ritt's predilection for allegorical characters — Old Sagacity or Craven Stud or Minds His Own Business — in morally instructional situations has provided frequent demonstration of the fine line between simpleness and pretentiousness. 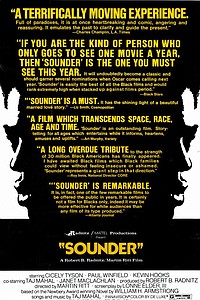 Ritt's new Sounder has its feet dragging in the 1957 style of serious television drama: The rave notices it receives are really ensnared at the starting gate. The reviewers fall into immediate sympathy, or complicity, with the subject matter alone. Never mind the treatment of the subject. Reviews lay to rest their mental faculties, if any, throughout a tricky slalom route to avoid the movie's sentimental misstatements and gaping omissions and blind distortions. (Sounder's looniest moment. of many, comes when a class of rural gradeschoolers surges into spontaneous applause in appreciation of the boy hero's inspirational anecdote during Show and Tell. It is poetic license enough to allow Periclean eloquence in the little tyke, but It is far too much to have his classmates respond like the PTA.)

When Ritt ducks away or wanders away absentmindedly, for a moment or for an entire film, from the deadening responsibilities of spokesmanship — spokesman for a cause or a race or a hot controversial ideal. such as honesty he appears to own a good sense for settings and subjects. For example. Setting: No Down Payment pictured a suburban housing development in credible optimistic colors, and crammed together, over-the-back-fence neighborliness, and the young marrieds' kept, lacquered appearance to companion their bright futures and material progress: and in Hud, Ritt was virtually definitive on Larry McMurtry's locality, small-

town Texas, with its hard-packed dirt flats and one-or-two story main street and a pervasive vacancy that is occasionally invaded by a lonesome, tinny twang from a transistor radio or a groaning, elephantine Greyhound which carries away fugitives from the desertion of the place. Subjects: The Molly Maguires unearthed the 1870's organization of fated terrorists who pushed for labor's rights in ashen-hued Irish Pennsylvania coal country; and The Brotherhood, a richly photographed Mafia story, three years ago anticipated most of the principal social-economic metaphors, the Family Man vs. Business Man ironics, and the ethnic procedures of The Godfather.

Clearly Ritt moves around more at ease in Pete and Tillie's neighborhood than in Sounder's. Making the rounds in Pete and Tillie, from suburban cocktail party to Chinese restaurant to beer joint to business office to family vacation site to the wallpaper in the dining room and so on, is done with a well accustomed sense of direction: and the purpose of moving through the milieu is basically to settle quickly in a comfortable middle-class location, unexceptional, undistracting, where Walter Mathau and Carol Burnett can operate in casual, retiring manner. Sounder's Louisiana locales, small farm and Southern jail and country schoolhouse, look believable enough on first arrival, but the imagination of what ought to transpire there seems to be pure guesswork, or wishful thinking. And there is a lurking sense of severe caution in the characterization of the black family. There is a kind of hat-in-hand, supplicant sense about their behavior, as if they harbor the feeling of being watched over, and one false move, one slip in serenity or patience or magnanimity or human-ness, would undo them. 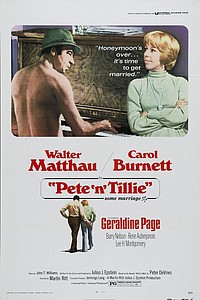 In sharp contrast, Pete and Tillie is interesting precisely because Matthau and Burnett hold to the far shore, in a brave removal from soliciting audience sympathy. Instead of presenting themselves, puppylike, in the personalities that the audience already knows, and presumably adores, they both play flat and standing-in-the-shade. Undoubtedly the most uncooperative bit of behavior is Burnett's grieved ranting at God and the Virgin ("I spit on you," spoken dutifully four for five times, like an inversion of the Hail Mary ritual). Geraldine Page, as Tillie's inevitable bosom buddy, is the only player in the cast v. ho does not seem to grasp that the point of the film is to create exchanges between characters in which no on gets short changed. Other than Page's flighty self-putdowns the playing of almost every encounter is a quite admirable balancing act in which the characters run parallel to each other with a kind of long-distance pacing and an avoidance of to-the-death conflicts, There is none of the usual feeling in movies that a score will be reported at the end of each character encounter.

Adultery has rarely been trotted out with so little assignment of blame, shame. Matthau maneuvers with the kind of practiced, slobby suavity that makes his philandering almost an inevitable consequence of his cocktail party roguish routines. And Burnett employs the right amount of self-deprecation, absence of wit and beauty, and coldness, to rule out any of the typical women's fiction self-righteousness in the suffering of a husband's inconstancy.

Ritt's previous movies have frequently contained good acting, and it is almost always of the type which has an actor moving away from the mannerism which built up a fond following in the public. Burton's seediness and Oskar Werner's banal villainy in The Spy Who Came In from the Cold; Connery's animal crudeness in The Molly Maguires: Patricia Neal's around-the-house slovenliness in Hud. But with a director who also permitted Paul Newman's cornball sexuality to roam unchecked from The Long Hot Summer through three additional movies, it is hard to decide that he does not merely provide his players with vast acreage of free space and that his percentage of success runs suspiciously close to the average of luck.