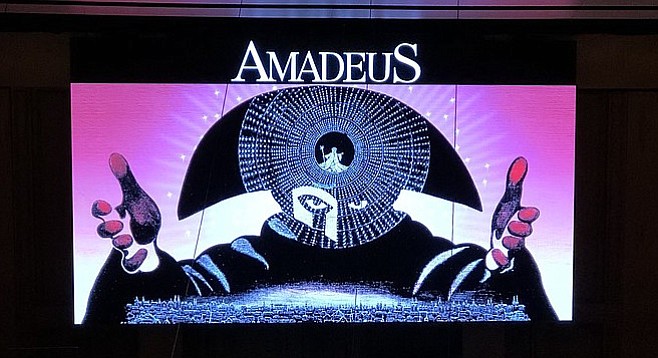 I happened to see that the San Diego Symphony was offering a screening of the movie Amadeus on a Saturday night (November 4) for $5, so I went. How could I not?

The movie was played at Symphony Hall but without the San Diego Symphony playing the soundtrack. That would have been an undertaking which warranted more than $5 per ticket. 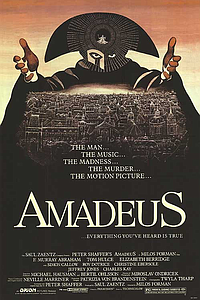 I take that back. The character of Antonio Salieri takes on a more sinister air in the director’s cut. In the theatrical version Salieri never slanders Mozart but rather uses inference to manipulate the perception of Mozart’s character. Salieri always manages to avoid lying even if he is trying to steal Mozart’s intellectual property by commissioning the Requiem in order to put his own name on it.

In the director’s cut Salieri warns Emperor Joseph that there are rumors about Mozart sexually harassing his pupils when the subject of finding a teacher for the Emperor’s niece is discussed. In another scene Salieri requires Mozart’s wife to offer herself to him sexually. In exchange Salieri will recommend Mozart for the position of teaching the Emperor’s niece. 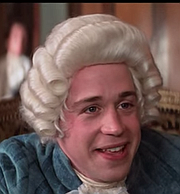 This makes Salieri a fundamentally dishonest character. The theatrical cut, by removing these scenes, allows Salieri to function without being a sociopath.

There were other scenes which simply didn’t work such as an episode of Mozart having to teach over a chorus of barking dogs.

What continued to strike me throughout the experience was how masterful Amadeus is as a film. Besides the age of the actors there is nothing in the film which gives us any clue as to when it was filmed. It hasn’t aged one bit.

I never saw this movie in the theater, and I enjoyed experiencing within the spacious confines of Symphony Hall. There was a little echo to the sound but by and large it was fine.

I believe Amadeus is the only viable dramatic movie about a composer, so I have no desire to see other films at Symphony Hall such as the Beethoven biopic Immortal Beloved. Yet I would welcome an opportunity to watch classical music documentaries at Symphony Hall along with a community of music lovers.