A Scribe Amidst the Lions 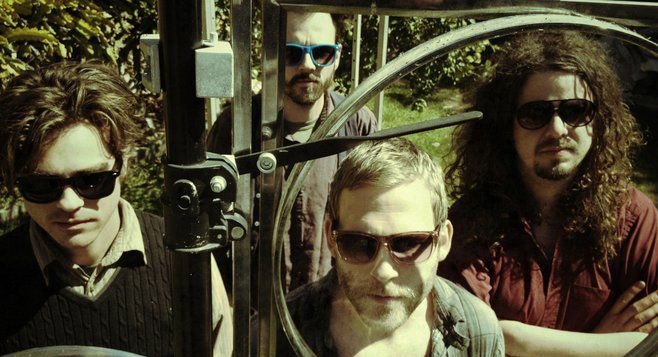 A Scribe Amidst the Lions used to be called Split Infinity. They changed the name after discovering it had been claimed by several other groups, not to mention a series of novels.

“We’re the original bad luck band,” says singer/guitarist Kristofer Towne. “If there’s a way to step in crap, we usually find it.”

To illustrate this point, guitarist/keyboardist Adam Jacobs describes an incident at a Seattle club called Rendezvous. "As we began loading-in through the back, someone noticed an obstacle to the right of the doorway; a hefty pile of human [feces], steaming away right there next to a nearby dumpster. Several times throughout load-in and load-out, we came close to stepping ankle-deep into the slushy pile. John [Woodard] from Jodi Hates the World came centimeters away from a sandal full of crap. He stopped just short of the pile when he heard a chorus of us yelling ‘Look out for the crap!’ It was still there when we loaded out. Hopefully, it rains enough in Seattle that it eventually washed away.”

Towne, Jabobs, and bassist/singer Bob Garrity moved together from Minnesota to San Diego in 2001, hooking up with local drummer Nate Ball. “Nate was more or less using his drum kit for dirty laundry bins,” says Towne. He says Nate underwent a nearly bloody initiation after their first practice session evolved into a house party where they were rehearsing.

“The old drummer’s intoxicated girlfriend showed up and started causing a scene,” he says. “You know the type: cocaine in the bathroom, flashing people, running around the neighbor’s yards shouting obscenities until the cops come…Upon spotting Nate and hearing what was going on, she started breaking bottles on the kitchen floor, all around his feet.

“After refusing to leave, she proceeded to lock herself in the hall closet for the next 20 minutes with someone else’s half-finished wine glass. No one remembers what happened to the glass. Some say she left with it still half-full. Some say they heard it break inside the closet, prompting suicide threats. Some say it just disappeared like she should have, and just the other day someone said that it was probably still in that fucking closet because us guys never cleaned anything.”

The band earned a bit of notoriety in December 2008 for their song "Evil Santa: Ballad of the Brothers Claus," offered as a free download on their website. Not everyone was amused by a Killer Claus.

Their 2010 three-part project The Last Sting Trilogy was planned to unfold over three maxi-singles, to be released over a nine month period and available on vinyl and digital formats. “We’ve decided to take a full length album and break it up into three different parts,” says Towne. “Money and the Mouth is the first chapter, followed six months later with Land and the Law, and three months after that Climax and Conflict…we want to bring back the golden era of records and B-sides!”

Says Townes, “I met Sour Soul doing sound at the Ruby Room and they just blew my mind. I felt like with Sour Soul, we could just gel and get people out and in tune with them. Like any band, they’re changing as they continue to play and write and I feel like we possibly influenced them on this split. But because the timeline was so short, we never got a chance to hear their music before the split, and they never got to hear ours. So when we heard the final version we were surprised. Scribe went more psychedelic pop and their song for the split turned out the be a six minute, epic, dark, kind of Muse-esque song, so it was kind of funny. We were both trying to gel with each other and it turned out great.”

As for the label releasing the split seven-inch, “Up until now, La Escalera Records has been doing punk rock,” says Townes of the label run by Ezequiel ‘Ziggy’ Pelayo of Moosejaw. “So they’ve been expanding as well, it’s not just punk rock and also they’re going international. Sour Soul has a house kind of similar to the Control Center [Scribe’s Linda Vista home studio] in Mexico City where they have small show, host bands from out of town, things like that, and they have this huge mural that became the cover for the album.”

"This is by far the strangest album we've ever made," says A Scribe Amidst the Lions frontman Kris Towne of their 2012 full-length Last Sting Trilogy Volumes II & III. "I mean, it's out there man! In a lot of ways, I feel like this particular record will alienate people as much as it will attract, and I'm actually kind of excited about that. Not giving a shit whether people like it or not is a really nice feeling and something new for me."

The band actually started most of the songs three years ago (Volume 1 was released in 2010), but decided to shelf volumes II and III and put out other albums, based on financial reasons. Says Towne, "The trilogy was intended to be a three part vinyl series, but the realities of pressing and releasing vinyls on our own became very clear after the first one."

"Opening the songs back up after years of sitting idle was definitely a challenge. Like anything, we've become much more proficient in engineering and producing after doing it heavily these last couple years. So when we opened up the files it was like, 'Whoa, what the fuck were we doing back then?' We have a tendency to go overboard in the studio, especially when we first got ProTools. It was like being a kid in a candy shop. More more more!"

"Well, since then I've learned a lot about the idea that less is more, and striving for killer tones for your foundational instruments is a much better approach than covering things up with lots of production and overdubbing. Mixing a song with 75 fucking tracks and poor editing will send you to the looney bin if you're not careful! Seriously this album almost drove me mad."

A couple of the newer songs were either an impromptu live jam with minimal inputs (such as "Kalendronika"), or spliced up mixes taken from different parts of songs on the trilogy. "Vocals from this song, keyboards from another, with lots of added production: backwards vocals, extreme EQing, heavy percussion, digital drums mixed with original drums, etc." The latter sort of piecemeal production is most evident on the cuts "What Happened to the Night" and "Pigeon to Dove."

Guest players on the album include Chris Block (trumpet), Steven Ball (violin, viola), Joey Nelson (Trombone), and Lucina González from Black Hondo supplying guest vocals on “Where is the Wolf.”

In early 2013, the group sent out an announcement. “After many years of creating some of the best music and memories of our lives,” according to an email from the band, “A Scribe Amidst the Lions is saying goodbye.”