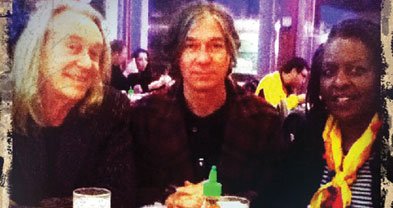 Influences: Playground Slap, Nine Inch Nails, Me Me the Moth, Art of Nolise, the Residents, the Penetrators, Devo

In October 2010, Joyce Rooks (the Dinettes, the Cockpits, the Penetrators) was driving her cello from Oceanside to the Cardiff-by-the-Sea studio of Marcelo Radulovich (Playground Slap, Me Me the Moth). Jim Call (the Penetrators) brings a theremin from Lemon Grove. Wherever the trio sets up, it’s a Nicey Nice World.

Among the band’s unusual instruments is a hurdy gurdy, as made famous by sixties folk icon Donovan in “Hurdy Gurdy Man,” and a Theremin, popular in science fiction film soundtracks.

According to Radulovich, “The first time we got together at my place, we started playing and improvising, and it all clicked so naturally that we were all a bit stunned, with ‘let’s play some more’ grins on our faces. We’ve all been around the original San Diego music scene for so long, it was refreshing to finally get together as a trio and hear the joyful noise oozing out of us.”

James Call: “We’ve all known each other for a long time...Finally, at a party, the three of us were speaking. We observed how nice it would be to get together to play and see what came of it. When we did, a particularly felicitous chemistry was noted, making us want to do it again.”

According to Radulovich, “We were in the annoying period a group experiences at the onset, the ‘What are we gonna call it?’ period. We were talking about something — cultural misconceptions, perhaps. Jim said something along the lines of, ‘They want it to be a nicey-nice world.’”

“We make unlearned music,” according to Rooks. “And insofar as it’s possible, unplanned. We are bound only by the physical limitations of our instruments. We never practice. We only perform. We embrace accidents, glitches and equipment failure; which rather than impede, inspire. We are thrilled by the instantaneous immediacy of happenstance.”

So is everything NNW does spontaneous? “More or less,” says Call. “We do use electronic loops. We might play along with the loop in a way similar as previously...or not. We have a few songs that we generally do play similarly. It’s still ‘unlearned,’ and, at least to a degree, ‘unplanned.’ I’m guessing a good 50 percent or more of any Nicey Nice World show is made up on the spot.”

In 2011, the band was doing a monthly residency at Ducky Waddles bookstore/art gallery, owned by Rooks and her husband Jerry. “It was originally opened in 1992, in Silverlake,” she says. "The store was damaged in the Northridge quake — that’s when we returned to San Diego. We set up in the main room, and there’s audience seating.”

Their self titled debut album was released in August 2011. For the collage cover artwork, Radulovich says “I followed this graphics trip I've been on, collaging, incorporating elements from the songs into the design. The boat is an old German depiction of the building of Noah’s Ark. On board, we have Dracula, a lamb, a lion, a book of matches, a host of characters, and the instruments we use when we play, out riding the waves of a stormy, invisible sea. We three and busy interactions are dipping into the abyss, pulling up $28 dollars each day. The boat churning, powered by Marcel Duchamp's readymades, is propelling us through the undertow.”

“Oh, and can’t forget the toast in the guises of Jesus, the Virgin Mary and Charles Darwin, all protectors of nice things; kudos to them!”

In late 2012, the band was renamed Nice World, with a revised lineup that debuted on December 9, 2012, at the Kava Lounge Gallery, minus cofounder Joyce Rooks.

“She had to take a break from music this year, as she was juggling two jobs,” said Radulovich in early 2013. “Jim Call and I liked what we were exploring musically, so we kept playing together. The humor of just dropping the ‘Nicey’ out of Nicey Nice World kind of stuck.” The band has also included Joey Carano, Ike Turner drummer Bill Ray, young bassist Henry Wessman (of Wit and Nathan Hubbard’s band), and bassist Barney Firks (Taz Taylor Band, OjoMalo, Schmaltz).

“The idea is to explore the creative topography of whatever the mood of the day is,” says Ray.

Radulovich says he's really enjoying playing guitar again. “But, in order to get the best of both worlds, I taped some velcro to my guitar, so now I have an iPod and iPhone mounted on it. Real wacky possibilities!”

By 2015, Joyce Rooks (the Dinettes) had rejoined the experimental band, which recorded a new album planned for spring or summer 2015, featuring "songs we used to perform, but had not recorded. It's sounding weird, warm, psychedelic, with a seductive, fugazi, astral veil coursing through its veins," according to Radulovich.