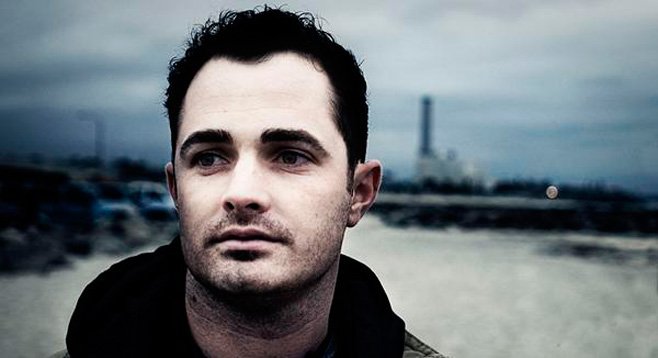 “I’m a mix of Switchfoot and Taylor Swift,” says singer/songwriter Josh Damigo. “My music is pop, with a slight twang. I usually play acoustic, but I also have a technically talented group of guys that plays with me on bigger shows.”

Damigo grew up in San Jose, where his musical career began when his mother signed him up for piano lessons at the age of 6. “I absolutely hated piano because my teacher kept giving me classical pieces,” Damigo says. “I quit [piano] when I was in sixth grade.”

He says a career in sports was more on his mind. However, “During a basketball game in college, I tore my ACL, MCL, and meniscus, and bruised every bone in my leg from my ankle to my thigh. Because of that injury, I lost my soccer scholarship at San Diego Christian College and started playing guitar and writing songs. So I guess it worked out.”

“At 16 I taught myself to play guitar. Two weeks after that I had my first show. I was playing at churches. I was mostly singing [because] I was a much better singer than a guitar player.”

Damigo's push toward a full-time music career came after a celebrity endorsement - of sorts. “I played at Stateside in Santa Barbara, and an older man came up to me after the show and said, ‘Young man, don’t you ever stop playing, you’ve got something special,’ and he walked away. My friend came up to me and asked how I knew Kenny Loggins. I honestly couldn’t remember who Kenny was. When I got home, I freaked out when I realized he’s the guy who wrote and performed the music in Top Gun.”

Damigo has received several San Diego H.A.T. Awards, including Best Male Performer, Best New Artist, Best Male Singer Songwriter, and Best Male Vocalist. He was also named one of San Diego's Up and Coming Artists by San Diego Troubadour magazine, as well as winning Best Local Recording for his full-length Raw at the 2009 San Diego Music Awards and a Best Acoustic SDMA in 2010.

Songs from his CD Pocket Change: the Acoustic EP, have been played on Rock 105.3 and KPRI FM, and he's performed on TV station KUSI.

“Lestat’s is my favorite spot to hang out and perform,” says Damigo. “I’m pretty much there every night. I’m a huge fan of acoustic music, and the soundman Louie Brazier and I just sit back and talk about life and music and catch up on the latest celebrity gossip. I love ordering their Snickers latte, which has hazelnut, chocolate, and caramel.”

In 2010, his brother was among the subjects in the HBO series Wartorn, about soldiers suffering from Post Traumatic Stress Disorder.

By 2012, Damigo moved back to San Diego, after spending around a year in L.A. That summer, he won First Place in the Singer/Songwriter Contest at the San Diego County Fair in Del Mar. He says his L.A. sojourn inspired his next full-length, Hope.

“The same girl that most of this album was written about...she broke up with me the day I got to L.A., and I pretty much stood around hoping she would come back. We went to coffee one night in L.A., but, other than that, I lived there for nine months hoping she’d come back to me...that place is stupid. I’m happy to be back in San Diego.”

Once Hope was released, he says “Fans love it. Everyone else seems to have a jab or two about it being ‘too long,’ or ‘all love songs,’ or whatever. That’s fine. Music is good if it makes people argue over it...the truth is that you’ll never be able to make everyone happy, and I’d rather have people debate and discuss than like and dismiss.”

His July 21, 2013 set at Lestat's in Normal Heights was recorded for a live album. The following year, he and his band the Freeloaders did a seven month weekly residency at the House of Blues downtown. His album I Will Be There was released in October 2014, preceded by the single “Just Give Me a Call.”

In summer 2015, he began hosting the longrunning local music radio show Homegrown, originated at KGB-FM in the 1970s but then running on KPRI. Early the following year, he relocated to Ventura County.