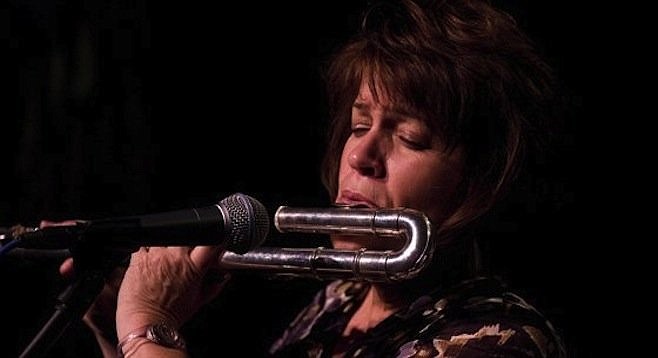 Born near Cleveland, Ohio, flutist Holly Hofmann was five when she began playing standards with her father, a jazz guitarist. At seven, her formal education began with lessons with Walter Mayhall and soon thereafter with the first flutist of the Cleveland Orchestra, Maurice Sharp. Her music education continued through high school at Interlochen Arts Academy. She graduated with a bachelor’s degree from the Cleveland Institute of Music and a master’s degree from the University of Northern Colorado.

After moving from Colorado to San Diego in 1985, she began working with bassist Bob Magnusson and pianist Mike Wofford at the Horton Grand Hotel. She married Wofford in 2000, often working with him in various quartets. From 2002 to 2006, the couple also toured and recorded with Flutology, a sextet featuring Frank Wess, Ali Ryerson, Hofmann, Wofford, and others.

Hofmann also took a job as music director for the Jazz in the Park Concert Series at the San Diego Museum of Art. She books or consults on several jazz parties and festivals, including Jazz at Newport in Oregon, and Jazz in the City at the State Theater in New Brunswick, New Jersey.

After signing to the Capri Records imprint -- which also features dozens of other big-time mainstream jazz artists like trombonist Grachan Moncur III, and Phil Woods -- she released the album Minor Miracle, with Wofford, Peter Washington on bass, and Victor Lewis on drums.

Hofmann and Mike Wofford have enjoyed a long association with the Athenaeum Music and Arts Library in La Jolla, where in 2007 they recorded their first CD as a duo, Live at the Athenaeum, Volume 2, on Capri Records.

Her album Low Life: The Alto Flute Project debuted in May 2014.