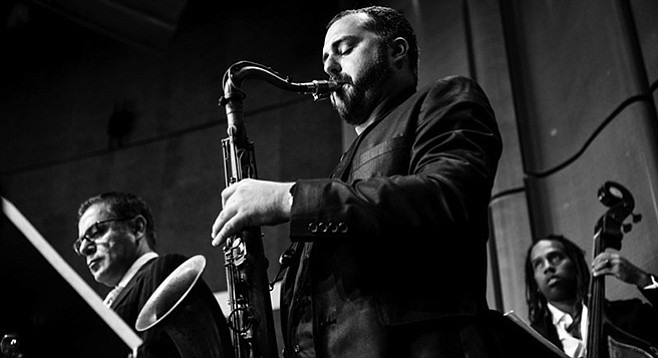 Robert Dove, Holly Hofmann, and more on the state of local jazz

“There’s live jazz every night here in town.” When I arrive, Robert Dove, a tenor sax player, a jazz guy, is waiting at the Ken Club’s bar. We pool our resources: between us, $22 dollars. “We’re good,” he says. He calls for a Guinness. I order a ginger ale. We recess to the adjoining hall where bands play, empty for now and quieter than the bar. Dove, bearded, in dress shirt, tie, vest, and jeans, is here to blow some horn and help run a jazz jam. It’s been going every Thursday at the Ken since he helped start it last Thanksgiving. The room’s four walls are painted blood red. In the semi-dark, I imagine it’s like what sitting inside of a whale’s heart might be like. Music starts at 10 p.m., and it’s not over until last call. Dove teaches music part time at a private school clear across town in Chula Vista.

Dove recounts, from memory, all the jazz shows in San Diego. “Monday night, there’s a jazz jam at Rosie O'Grady's from 9 p.m. to midnight. Tuesdays, there’s a new Latin jazz jam at Prohibition in the Gaslamp. Wednesday evening is Gilbert Castellanos and his jazz jam at Panama 66 in Balboa Park. Thursday nights, you have a lot of choices: Bill Caballero’s Latin jazz jam at Border X in Barrio Logan, Gary Rich and his monthly jazz jam at Bourre in Rolando Park, and here.”

The ground floor of San Diego’s jazz scene is an independent radio station. Later, when I talk to Downbeat Rising Star Holly Hofmann, a jazz flutist who lives here, she reminds me that KSDS Jazz 88.3, along with the Athenaeum series in La Jolla and Jazz at the Jacobs, brings national level acts into San Diego.

Add to that education: many area high schools mix band class and jazz, and both UCSD and SDSU have jazz degree programs. Our city its own church service: Jazz Vespers, at the First Presbyterian Church downtown on Saturdays at 5 p.m.

But, like any other jazz scene, venues come and go. Losses in recent years include Anthology, which became the all-purpose Music Box, and 98 Bottles, a busy venue that closed, came back as the Loading Dock, then ditched live jazz for sports. Jazz in the Park shuttered and begat Jazz in North Park at the North Park Theater (now the Observatory), a stop on the national circuit that lasted but a few seasons. Old timers will remember way back to Chuck’s Steak House, Elario’s, and La Jolla’s Blue Parrot, all long gone.

Then there’s Dizzy’s, a moveable feast of jazz music that, like the drum-toting bunny, keeps on going.

Since Chuck Perrin first opened Dizzy’s in the East Village in April of 2000 he has been forced to relocate his live jazz venue at least four times. “Four times officially.” But fans will remember even more moves. These days, the jazz collective runs out of the meeting room in the Musician’s Union Hall on Morena Boulevard. “It’s a destination, Dizzy’s. Fans pay for the right to sit in the audience,” Perrin says. “They don’t make noise. It’s unreal. They’re appreciative.”

The reason Dizzy’s survives, he says, is that “there’s a lot of good music going on in this city, a lot of great musicians living here, and a lot of young musicians coming up. And the jazz veterans we’ve had living here in San Diego through the years has been just staggering. The late Joe Marillo,” he says. “Gary LeFebvre, and Mundell Lowe.”

“The audience here is not in the large numbers,” Hofmann explains. If there is a downside to San Diego’s jazz scene, she blames it on demand. “In other cities, we have bigger audiences willing to pay more to hear jazz.” She and Mike Wofford, a pianist, perform together in jazz venues across the country. “But compared to the cities we go to? San Diego is one of the better scenes. It’s more inclusive here of all levels of players, from student to pro level.”

Hofmann is cheery about youth jazz education here as well. She likes UCSD’s annual Jazz Camp, and jazz trumpeter Gilbert Castellanos’ Young Lions series. One would think that the large amount of jazz education going on here would produce more jazz fans, but Hofmann says no. “What it does,” she says, “is it generates more competition for fewer local gigs.” Was there ever a time when a jazz musician could pay the bills just by working San Diego clubs?

“I don’t remember one. But I came here in the late '80s. Mike [Wofford] might remember such a time; he was raised here. But as far as I know, there never was a time when clubs paid enough to live on artist fees alone. The best jazz musicians have combination careers that include recording, teaching, performing, and playing community outreach gigs, like fundraisers and so on.”

Hofmann herself has been known to book national jazz acts from time to time at her Handlery Hotel jazz series in Mission Valley. “We’ve been there three years now,” a gig she says is standing-room-only on Friday afternoons. “Every single Friday, it packs up. We’re only talking 70 seats,” she admits, “but compared to Small’s in New York, which is a renowned jazz venue, the Handlery is big.”

I first met Robert Dove four years ago. He had just moved to San Diego from his native Ohio. He came here specifically for the jazz scene. Why not New York? “For me, San Diego was a fresh new opportunity and a different perspective. I’d been on the East Coast. I wanted to be on the front end of something that was establishing itself.” How did that work out? Is it better these days, the jazz scene here?

“Better? I don’t want to say better. It’s just different. For example, the younger guys aren’t young any more. I got here when I was 23 years old and I didn’t know which way was up.” Dove says he’s since been able to leave his day job wrenching on high-end bicycles, this due to the amount of work he is getting here as a jazz musician, plus the teaching.

“Are there more opportunities to perform now? Yeah. Sometimes, you have to be creative. If you try to go the traditional route as a performer, I don’t think you’ll do quite as well. Sometimes, it pays to step outside the box. That’s how we got this session.” Dove is referring to the Ken Club jazz jam, the Ken being a venue known for indie, punk, rock, and blues shows.

“We wouldn’t have found this if we hadn’t been willing to take a chance.” Thus far, it seems to be working. The Ken’s sound guy confirms 40+ fans at the door last Thursday, at a cover charge of $5 each. Average age? He thinks about it for a minute.

“Yeah, there were a few seniors,” he says. “But mostly, people in their middle 20s.”