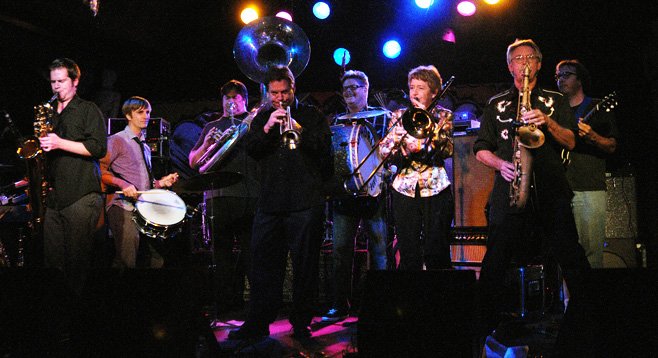 When fully engaged, it is a brassy conflagration. The horn players sound as if on the verge of blowing gaskets. But in this case, the members of Euphoria are determining where the snare and bass-drum accents will land in their arrangement of “Blues for Ben.” “Less Bonerama, more Stanton Moore,” says Drew Miller by way of direction.

Miller is Euphoria’s bass drummer and has hosted a weekly radio program called the Second Line Parade on the City College radio station Jazz 88. Miller cofounded the band with a pair of New Orleans musicians who moved to San Diego post-Katrina. Oceanside guitarist Dave Bandrowski (Zapf Dingbats) and snare drummer Ron Bocian (Red Fox Tails) are both former students of a New Orleans wild man named Johnny Vidacovich. The two have the air of hipsters; one wonders how they came to be drawn to such traditional music.

“Living in New Orleans, you hear this stuff constantly,” says Bocian. “You hear a few second lines, then, you start looking for them. Then you’re staying out and partying and the next thing you know, you’re looking for rehab.” He laughs. Bocian says he tried to start a brass band for two years after relocating to San Diego but had no success. “You gotta speak the same [musical] language to be able to do this,” he says.

But after he heard Dave Bandrowski as a featured guest on Miller’s radio show, connections were made, says Bocian, and the band was launched. The eight-piece includes trombonist April West, Dave Jackson on tenor sax, tubist Wayne Rice, Steve Ebner and Tim Jameson on trumpets, and J.P. Balmat on bari sax and reeds. Balmat is band instructor at Mission Bay High.

Miller says that the Euphoria Brass Band is the only New Orleans jazz band in town and as such, they have been invited to play club dates and the recent Gator by the Bay and Fiesta Del Sol festivals. In keeping with tradition, they were also asked to play a funeral. “It was a guy’s death-bed request,” says Bocian. The term “second line” refers, in fact, to a funeral procession. “The first line (or main line) is the deceased, friends, and family,” says Miller. “And the second line,” he says, “is the band.”

In November 2011, the band completed recording their first full-length Coast to Coast, sending it off to New Orleans for mixing and mastering by Mike Hogan at Necromancer Digital in New Orleans. According to Miller, “It’s a nice mix of traditionals, funky contemporary tunes, and a sprinkling of killer originals.”

For recording, the eight members of Euphoria plus two additional guest performers managed to fit themselves and their instruments into a living room that had been converted into a recording studio in the Rancho Santa Fe home of Hiro Ikezi. “We brought in fifteen tunes to record over two nights,” Miller says. “We recorded live as a band in one room, no overdubs.”

For Coast to Coast (released in early 2012), Euphoria recorded contemporary brass band favorites with several originals written by sax/clarinet player J.P. Balmat, Bandrowski, and sousaphonist Wayne Rice. “On a couple of the originals, we basically worked songs up right there on the spot.”

As of 2019, Ron Bocian was also performing with the Crew D’Etat Brass Band, which was playing regularly at Seven Grand.