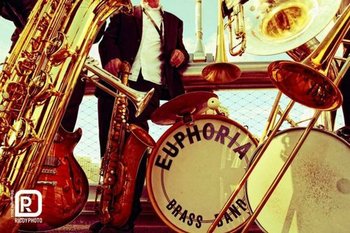 1,815.7 miles from the mother ship of New Orleans the NOLA revival continues here on the West Coast. The Euphoria Brass Band, a San Diego group steeped in the traditional sounds of the second line has self-released their debut, Coast to Coast. Mixed and mastered by Mike Hogan at Necromancer Digital in New Orleans the dozen tracks sizzle and snap with the energy, rare as it may be, of an art form that is a hundred years old if it is a day.

NOLA, meaning New Orleans-Louisiana describes a tradition that extends from the oldest form of jazz - Dixieland - and that has seen a couple of revivals: once during the '50s and later in the '80s. Now, there are a handful of such bands that get regular play on jazz radio including Stanton Moore, the Rebirth Brass Band, the Dirty Dozen Brass Band, Galactic, Bonerama (sorry - they trip my odious meter) and at the extreme indie end of things, the Revivalists. Why all the fascination with second line? Because the music has to do with death.

Second line was a funerary tradition in the New Orleans of old. The first line would consist of a decedent, relatives, and a brass marching outfit. Those who followed in swagger, stutter-step, or waving parasols or white hankies were called the second line. These are the roots of an art form now many generations removed.

Today, second lines more often than not exist for the sole purpose of the enjoyment of the music. Call it a jazz funeral without a body, which Coast to Coast acknowledges with their cover of "Just A Closer Walk With Thee," and possibly "Whoopin Blues" and Abdullah Ibrahim's "The Homecoming Song."

Originals by bari saxist JP Balmat and tubist Wayne Rice and David Bandrowski, a New Orleans transplant who plays guitar and banjo give the Euphoria soloists a chance to punch the energy through the roof, which by the end of a day is the real job of any brass band: to leave us in a better place.