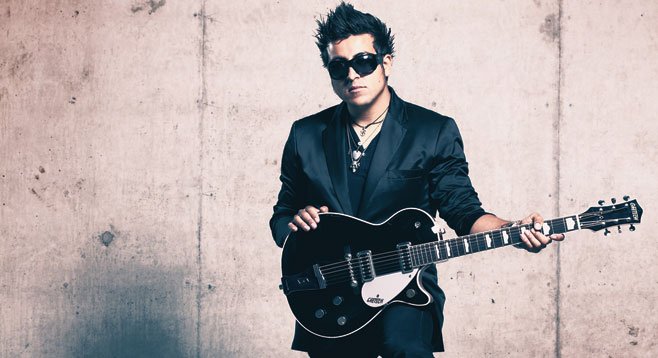 RIYL: The Rembrandts, Hoodoo Gurus, the Rugburns, the Shambles

Blizzard front Chris Leyva's 2008 solo debut Singled Out, produced by Lee Coulter, was nominated Best Local Recording at the San Diego Music Awards, while his 2009 release 27 was nominated for two SDMAs. The latter is more electronic-based than his previous projects, having been mastered and coproduced by Chris Reynolds, whose local techno act Red Flag made the Billboard top-ten charts back in 1988 with their song “Russian Radio.”

Many of his tunes are autobiographical. “I have a song called ‘New Life’ where I sing about being a rock-and-roll troubadour, always looking for adventures, romance, and inspiration: ‘I went searching for some fun last night/ Got so drunk almost got into a fight/ But I wouldn’t want a new life/ Or be stuck at home with new wife/ I’ll just take my throne and write a song for me.’”

“My newest music is a mixture of indie pop, electronic dance music, and indie rock, making it a simple mix,” says Leyva. “Add to that the sound of British rock, with some acoustic troubadour, and that’s pretty much what you get with me.”

Leyva, who grew up in Mexico City, also books bands at venues around town and co-manages the Black Cherry Group that he founded in 2006 with Reliable Records main man Jerry Segal. “We wanted to offer something positive in the midst of the slow demise of the music industry,” says Leyva of the downtown San Diego company. “We handle artist relations, concert promotion, and we do a lot of brand marketing. [Black Cherry Group] was envisioned as a company that could help artists with the nuts and bolts of the music industry.”

One great perk of running an artist rep agency: “The invitation I got through my email to the 2010 Grammy Awards, via Black Cherry Group. It was my first time at the Grammys, and it was as awkward as a high school prom. I was overdressed, and in all the pictures I look totally dazed. I got invited again [to the 2011 ceremony], and I kept it cooler, less dressy. I think I’m getting the hang of it, but I’m still not used to the red carpet.”

Around that same time, Leyva was buying local talent for both House of Blues and 4th & B. He also showed more than a passing interest in booking local concert landmark the Starlight Bowl. “I tried to rescue the Starlight Bowl because I saw the amazing potential a venue like that had,” he says after learning that managers of the 4000-plus seat amphitheater had recently filed bankruptcy. “I wanted to see it become like a mini Hollywood Bowl, and why not? The Starlight has alcohol permits and a huge parking lot.”

“I produced a mini festival [Staring at the Sun V, in March of 2007], but [Starlight management] got greedy and turned people away at the door.” Leyva had flooded high schools throughout San Diego County with free tickets but says Starlight refused to honor them on the day of the show. “She [then-manager Susan Suffecool] started charging them all.” Concertgoers who refused to pay were turned away, he says.

In August 2011, the Starlight Musical Theater, claiming debts well in excess of one million dollars (including payroll taxes, loans, and union pension-fund contributions) filed for Chapter 11 reorganization and canceled the remainder of the 2011 season. But this is not the first time the venue has come up short: the troubled institution was forced to shutter their 1995–’96 season as well.

Former San Diego Repertory Theatre managing director John Redman was brought in by Starlight management as a consultant in 2008. What he walked into was fiscal confusion. Redman urged the board to file bankruptcy as early as 2009. He still thinks that will save the San Diego landmark.

“They’re not declaring bankruptcy and saying we’re closing our doors; that’s not what’s happening. They’re holding off the creditors.” The board, he says, is planning 2012. “They’re even looking at doing things this year.” Meanwhile, Starlight season-ticket holders are being offered ticket-for-ticket exchanges at four area theaters.

The Starlight Bowl dates back to the 1930s and the California Pacific International Exposition in Balboa Park. It sits directly under incoming Lindbergh Field air traffic. Entire Broadway musicals are known to freeze onstage during peak moments of jet noise and then resume. Although not so much in recent years, the flyovers have not deterred live rock. Buffalo Springfield, Bob Dylan, the Stones, Korn, Danzig, Stevie Ray Vaughan, the Allman Brothers, the Ramones, and many more are part of the rich heritage of rockers that have shouted down the airplane noise from the Starlight stage.

His 2012 full-length 1957 is a covers album with a punch of punk rock, made with the same spirit of the originals and featuring a cast of great musicians. Leyva takes center stage on songs by Elvis Presley, Eddie Cochran, Chuck Berry, Little Richard, Jerry Leiber and Mike Stoller, Berry Gordy Jr. & Janie Bradford, Ben E king and Phil Spector, and Vera Matson. The cast also features the great guitar work of Phillip Griebel, the dual rythm section of Thomas Lord on bass, and Ryan Schillawski on the skins. Special appearances by world renowned saxophonist Blaise Garza and boogie woogie keys by Salvatore Filipelli.

“It’s similar to John Lennon’s Rock and Roll album,” Leyva tells the Reader. “There are two songs that are not from the 1950s, but we felt they were important, as they penned the progressions of the time: ‘Stand by Me’ and Phil Spector’s ‘Be My Baby.’ Both songs marked the birth of rock and roll production, and what better way to end the record. The album is made to be played from beginning to end, as if you were home or in your car listening to the radio, narrated by Alan Freed.”

Around the same time in early 2012, Leyva released a solo full-length Live Learn Loose and was playing around Southern California with his band Leyva & the Dead 67’s, which specializes in a mixture of early garage rock and punk.

A video for “I Need You Now” released in summer 2012 features his five-piece band the Falling Doves, which he calls “A collection of old friends and professional touring musicians. The band was made to accompany me and my diverse songwriting catalog,” says Leyva of of the ensemble that includes drummer Cameron Foley and Italian transplant Stefano Belforte.

“I met Stefano the Saturday night he arrived in Los Angeles, he had literally been here three hours...we had a full band by Monday, and he moved here from Italy. The name the Falling Doves came from an article I read about birds falling all over Italy and Rome, and I just felt, What’s next?, you know? End of the world?”

“It’s recorded entirely in Ocean Beach. I waited to complete the record until I got the feel. I will say I’m the lucky guy that has had the pleasure to relieve my 20s in Ocean Beach, with all the amazing women I’ve had the pleasure to romance on the cliffs, and all the awesome windows and semi-awkward mornings I’ve climbed out of bedrooms, all through Ocean Beach, all the lonely walks after my break up. For me, OB is about new friends, old friends, and late night bar conversations at places like Pac Shores and Tony’s. I did write a tune specifically about the gorgeous bartender there, she’s only there on Mondays and she’s an awesome photographer too. But, yes, eighty percent of the album has the OB feeling. I got my start there in the old Java Joe’s days with Mraz and Poltz, and the ever-so-dreadful Dream Street.”

Falling Doves played around two dozen dates on a tour that started March 10, 2015 in Washington DC and wrapped April 2 in Denver, Colorado, including several Canadian shows. Leyva then announced that he'd signed a three-way record deal with London Based record label RMN music for his old Blizzard catalog, Falling Doves, and solo work.

RMN released his solo album Noise Hotel in October 2015, billed under the moniker Leyva. He continued to record and tour with Falling Doves, including a UK and German tour retracing the Beatles steps that eventually led to a gig backing original Beatles drummer Pete Best at Queen Bee's in San Diego in March 2018.