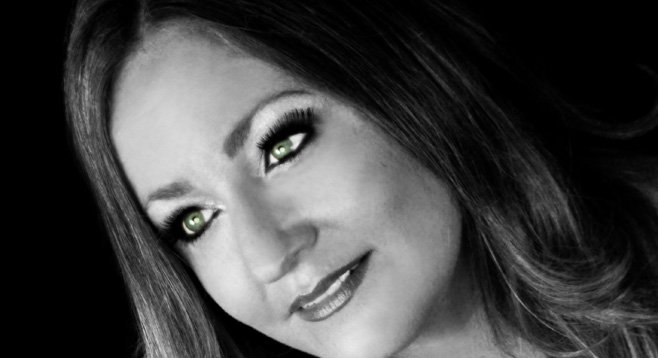 “Freshman year in high school, I signed up for choir thinking it would be an easy class to ditch,” says Cathryn Beeks. “Instead, I ended up figuring out that I wanted to be a singer. I pretty much lived for music from that point on, and in 1992 I left my hometown of Lancaster, California, in a motor home...to make it to the big time. The crazy adventures and experiences I had along the way are the songs I still sing today.”

Beeks first earned local notice in JunkQueen and the Gandhi Method. She’s also carved out a niche with her series of local band showcases around town (“mostly free”) called Listen Local. “I was trying to become a famous rock star when I arrived in San Diego in 1999. By 2002 I was supplementing my secretarial income [by hosting] an open-mic night at the Coaster Saloon. About that same time I decided to post an online calendar. It made more sense for open-mic musicians to be able to sign up ahead of time and promote their performances. My open mics were scheduled in various venues all over San Diego. Then, in 2004, I started ListenLocalsd.com.”

What followed became a second career. “It started with my open mic nights as a chance for newer, inexperienced bands and performers to get exposure. I adopted the Listen Local name and dropped the open mic connotation. Now I have big-name acts like Gregory Page coming to play alongside the lesser-known locals, for fun, and also to expose their music.”

The Listen Local showcases take place at various venues, including the monthly Acoustic Alliance, where four unrelated performers share the stage at the same time, switching off songs. “The audience gets a taste of every performer’s style, instead of just catching one person’s set and leaving,” says Beeks.

Local performers are invited to sign up for a showcase. “If I haven’t heard of the band or performer, I usually start them at Hennessey’s, since they have the most available slots. A band doesn’t have to send me a promo kit, they just need to sign up to play.” Interested performers can visit listenlocalsd.com to view a calendar of bands, venues, events, and available openings for new acts.

“Cathryn was the first person to give me a show outside the coffeehouse scene,” says Josh Damigo. “I was nervous and excited and probably stuck out like a nun in a strip joint.” Damigo has been a regular at the Game, Beeks’s frequent songwriter showcases where she provides a song title, around which anyone is invited to write and perform their own tune. “My set at the Hard Rock will consist of the songs I’ve written because of her prompting for the Game.”

Astra Kelly first met Beeks while camping in Colorado, eventually accepting Beeks’s offer to play a San Diego show. “A year later, I packed up a moving van and thankfully made my way to California, where Cathryn opened her arms and her heart and helped me get to know the local scene.”

“She’s the one person every beginning singer-songwriter has to know when they start playing music in San Diego,” says Kenny Eng, who began performing for Beeks’s events at downtown’s Dublin Square in 2007. “She’s like the nice version of the Godfather. If she gives you her blessing, you’re good to go.”

Her current band is the Cathryn Beeks Ordeal, whose album Desert Music was released in 2008. “I have a seven-piece band, so just getting everyone there at the same time is often tricky, hence ‘the Ordeal.’ Once we’ve assembled and assessed the sound situation, we’re usually good to go. Because we have three vocalists, sax, and mandolin, in addition to our standard instruments, sometimes we have to play completely unplugged. Luckily, my band is laid back and professional enough to roll with whatever gets tossed at us.”

One Ordeal song is called “Keep Walking,” which Cathryn wrote “as a tribute to the people who train all year to walk 60 miles in the Breast Cancer Three Day Walk. I asked a friend of mine who is walking in this year’s event to give me updates on her training and progress, so I could share it with my Listen Local list subscribers. She agreed and surprised me by starting Team Listen Local and inviting others to join and walk with her. Besides the physical part of the event, walkers must raise $2200 and have health insurance.”

In 2010, Beeks was nominated for San Diego Magazine’s Women Who Move the City event, for her tireless promotions of live music events several nights each week, around town and on local radio. She also recorded a theme song for the Reader comic strip Overheard in San Diego, with the help of Sven-Erik Seaholm and drummer Bill Ray (of Ike Turner's band).

2011 was a somewhat more bumpy ride for her. “I’d been living in pain and without health insurance for about six years,” Beeks told the Reader in October 2011, though she nonetheless managed to promote over 500 local concerts during that time period. “I finally got insurance and had an MRI, which showed a fairly large, presumably benign tumor called a schwannoma growing on my spinal nerve, in and out of my L4 and L5.” Beeks underwent surgery in late July to have the tumor removed.

“It took almost eight weeks for me to be able to walk normally again, but I’m getting better every day and am out of the horrible pain. I’m finally sleeping [and] back to work hosting my shows.”

2013 found her embarking on yet another local business venture. “A friend and I opened a vintage and second-hand clothing store geared toward musicians. It’s by appointment only, since it’s located in my home. But we’ve been having sales open to all a few times a month, too. We call those shop jams, since musician friends stop in to shop and stay to play.”

Her Listen Local showcase at House of Blues wrapped in September 2015, around the same time that she launched a new project called Lunch Ladies, to "provide live acoustic entertainment and delicious catered meals for your mid-day events."

After 20 years in San Diego, Beeks relocated to Lucerne Valley in September 2019. "Besides hanging with the ‘rents [parents], hiking with the hubs, writing songs, and making art my camera and I will be exploring the diverse original music scenes of Big Bear, Joshua Tree and everywhere in between."

"We are too deeply rooted in San Diego to ever really leave. We’ll both continue to work here and we plan to be here as often as you book Calamity, hire Jon Edwards Live Sound Support, or need affordable photo/video services. I’ll continue to host The Game and help The Museum with their music program producing concerts and festivals throughout the year, so keep an eye on the calendar."