A Prayer for the Easter weekend

"Dear God: May her hands be steady and the earth be still." I gripped the two armrests and tried to focus on breathing slowly and steadily, thinking about anything other than what was happening in that small room down an open hallway off the main sTreet. The business name was engraved on the door. That was a comfort. The Eagles were singing Peaceful EasyFeeling followed by the sultry tones of an Adele ballad.

I strolled thru the banks drive through window, the wrong way, and headed south a couple of blocks, stopping in front of an empty storefront that my employer has leased- but not yet renovated. peering through the window nothing but an empty space and a door at the back.

It's Saturday I thought. I don't really care if people can drive by that back door- I walked to the opposite curb at the crosswalk on the next corner. there is a sushi bar- and I would've stopped in, but they weren't open. The Thai restaurant was- but I didn't want Thai at 11am, at least not today.

Quickly maneuvering my way across another street, I glanced into shop windows. Small designer boutiques and brand designer signature shops. Walked right on by Warwicks- not interested in books this morning.

Even Adelaide's Florist didn't suck me in- in the back of my mind I wanted drink or food or pre-mid day chocolate truffles. stopped at the hardware store sidewalk sale- k cup coffee maker, battery operated pepper grinder, immersion blender. " I can take another 50% off the red tags he said, actually, off the green tags too." sorry I said. I already have all this stuff, just killing time.

Near the next corner I saw some interesting earrings in a shop window. I scooted into the building and into an open door. The music was great, there were lots of locally handmade goods- belts, bejeweled buckles, jewelry and handbags. High end European silky camisoles, a handful of interesting shoes, and scarves, and objects, felted stoles and knitted caps. I circled the room twice- the owner a handsome guy, talking on the phone. Don't mind me I said I'm just killing time. He smiled. Most of the earrings had French wires, and I've learnedover te years that I fool with them until inevitably one disappears - hidden from view like a second sock in the dryer. Necklaces with pieces of metal chokers -the two ends not connected, no clasp. others not arty, just decorative- not my style

I felt conspicuous- wearing my weight watchers weigh in clothes from the early morning, flip flops and no makeup or jewelry. I knew I was going to buy something if I could find something that didn't have an outrageous price tag- and settled on a pair of gold dipped leave earrings with a clasp wire. totally justified purchase as he gave me the locals 20% discount which brought the price down to $150. The owner was respectful and friendly and made me feel good. Switching sides again I entered a shoe store that carries some of my favorite high end brands- both salesmen looking at my feet and dismissing me. I looked around despite the outright snobbery, but made a mental note to buy elsewhere because of their attitude- grabbed a scone at cups "but where do they hold the classes " I asked. cool milk bottle and tinted glass wall near the entrance.

Time for my appointment- ill be spending the same amount for my treatment as I did on the earrings up the street. Still a bit nervous, my first time after all. I'd used the same phrase repeatedly over the past week- ill either be blind or look like cleopatra - the practitioner is probably a crack head borrowing a friends shop to pay for partying tonite, and recovering from the night before.

Ok lie down and keep your eyes closed but loose she said. I need to go a quick turn to open up the skin so I can add a stronger I numbing agent.

"Dear God: May her hands be steady and the earth be still." I gripped the two armrests and tried to focus on breathing slowly and steadily, thinking about anything other than what was happening in that small room down an open hallway off the main sTreet. The business name was engraved on the door. That was a comfort. The Eagles were singing Peaceful EasyFeeling followed by the sultry tones of an Adele ballad.

She tuned on the eyeliner engraving tattoo tool whatever you call it. She told me to keep my eyes closed and began the scaling movement along the edge of my upper lids. 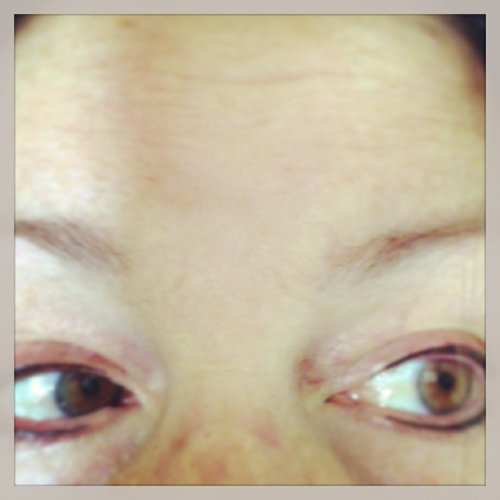