Meet Callu. He's a dog of approximately ten years; a mutt of indeterminate breed. He weighs about 90 pounds, has black and tan markings and a perpetually wagging tail. He lives on my futon.

Callu has come a long way. August 2010 he was being held at shelter in Queens, New York. Days from being "put down" a rescue posted his picture on Facebook and I decided to foster him. Three days later a van pulled up to my house. When the door slid back, out toppled this ungainly dog. He seemed strangely excited to see me, "tapdancing" down the sidewalk, into my home and onto my futon. Where he promptly plopped down, exhausted from exertion. I looked at him and shook my head. "Don't fall in love, buddy. It's just ten days, then you're out," I said more for me than for him. Obviously.

Seems neither of us were listening though. Since then, he's accompanied me everywhere, most particularly from the gloom of New York City to sunny San Diego. Rita, my fiancee, her two dogs (Steve and Black Mamba) came with Callu and me, all packed into one orange Honda Fit. The two and a half week road trip that zigged and zagged throughout the lower half of the US was an adventure. We were sad when it was done, to say the least. A year later some of the fur on Callu's tail is still missing, from sitting on his butt too long. So, maybe he isn't quite as sad as Rita and I.

My boy certainly enjoys it out in Cali. The sunny days translate into a lot of outdoor high-jinks. Well, maybe not as much as he'd like. Every time he jumps in the car with me, he thinks he's going to Fiesta Island, Ocean Beach, Black Mountain or Coronado Beach. Imagine his disappointment whenever we pull up to Citibank instead. Although... methinks his surly-eyed protestations of boredom are a wee bit exaggerated. As we draw closer to summer again, I've noted his interest in the car's air conditioning. He noses the vents on the console with a blissed-out expression on his wrinkly face. Plus, he's always excited to "tapdance" his way back to the futon again. Even now, as I write this, he dozes there, occasionally lifting his lids to gaze at me, as if to say: "Wake me for dinner, dude."

Rita and I have established our own dog care service since we arrived here. Yogi Pups & Purrs. And I've been freelancing my writing skills in the meantime, as The Diamond Spade. Contrary to what you might suppose, this means we spend a lot of time with dogs but very little time at home with each other. Taking a rare moment like this one to reflect on my life, Callu and how we got to San Diego is a little like reliving all those experiences again. For all the fears I had when we first arrived, I find that almost all of them came true. Yet I'm still here. I can smile and look forward to whatever comes next, as long as that oafish dog is on my futon.

Yes, he's come along way in the last two and a half years. And so have I. 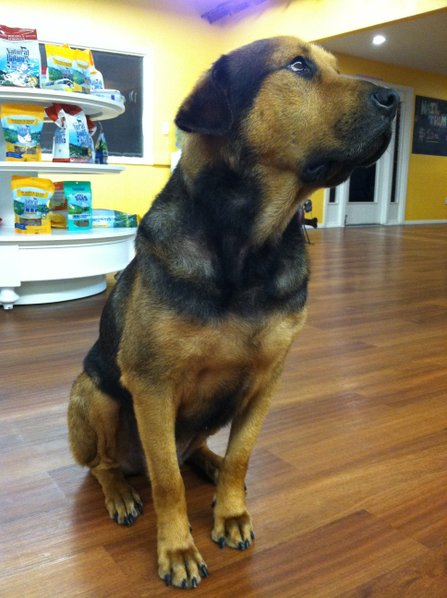 Hanging with me at my night job, Camp Run-A-Mutt.