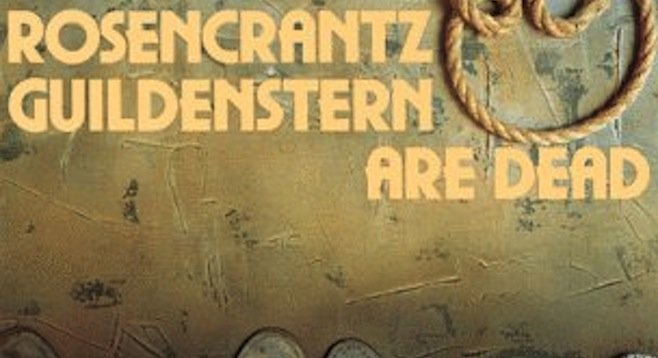 From the Fringe: Rosencrantz and Guildenstern are born, part one

San Diego's first annual Fringe Festival, by all accounts, was a hit. We saw all kinds of experimental work rarely done around here, and hope next year continues what should become a longstanding tradition.

Anyone needing a testimony to the virtue of such festivals, heed ye the following.

Tom Stoppard began a play in 1964. He called it Rosencrantz and Guildenstern Meet King Lear and could never seem to get it right. After several drafts he changed the play to Shakespeare's Hamlet and the leads became minor characters in the tragedy. They have no tangible existence outside the script yet are outside, somehow, and on their own much of the time.

Stoppard sent this version to the Questor's New Play Festival in 1965. Judges rejected it. Said it was unfinished.

Stoppard was in debt and completing his first novel, Lord Malquist and Mr. Moon (which reads like a Tom Stoppard farce in prose). He revised the play in his spare time, added a third act, and titled it Rosencranzt and Guildenstern Are Dead. Then he went whole hog. He sent it to the Royal Shakespeare Company.

This would be like sending your first short story to The New Yorker (which I actually did, back when, and got the nicest rejection slip I've ever seen).

Stoppard shot for the moon because he was convinced he'd be a novelist, first and foremost, and that "the play would be of little consequence."

The Royal Shakespeare's literary manager, Jeremy Brooks, read it. He gave Stoppard a long list of revisions, mostly cuts, and said the RSC might stage it down the road in a "satellite season."

A year passed. Zilch. So Stoppard sent the play to the Royal Court (which balked at its "linguistic flamboyance" - itself linguistically flamboyant) and the prestigious National Theatre, home of Sir Laurence Olivier.

Trevor Nunn, artistic director of the RSC gave the play to the Oxford Playhouse. They didn't bite either and sent it to a student group, the Oxford Players. They liked it so much they wanted to take it to the Edinburgh Fringe Festival in August, 1966.

But with serious revisions, due in July. And Stoppard wouldn't make a dime, and they would make 10% of all gross receipts from every production for the next five years. Stoppard could attend rehearsals, and would have free room and board, and a free, first-class train ride home.

Rosencrantz and Guildenstern Are Dead was scheduled for the Cranston Street Hall, on Edinburgh's Royal Mile between August 24 and September 10.

The "unknown" author entered a funhouse as mad as anything R &G encounter at Elsinore Castle (okay, almost as man; the Elsinore folks were plum flat nuts).

But more on that next time.