Grant Hill backyard circus celebrates over 500 shows with a live narration of their history.

On Saturday, July 13, Technomania will be celebrating over 500 shows with a documentary to be shown at their home base of Victory Theatre (2558 Imperial Avenue, Grant Hill).

The showing features a one-time-only live narration from Dr. Techno and runs from 8 to 11 p.m.

“From the bizarre to the unusual, nothing is normal at the only DIY circus that has survived for this long,” the Circus writes.

“Using recycled goods, cardboard, and fluorescent paint we have kept the smallest circus (fleas included) alive and kicking thru salvaging and sheer determination. See the shows from Technomania’s archive of original Xanth (30th & El Cajon) VHS tape video recordings thru its present day tenancy at Victory Theater with multiple HD cameras. From the intimate stages of the original backyard 2438 circus to the big stages of Street Scene, St. Cecilias, and The Playa, BRC we cover it all in this 2 ½ hour once-in-a-lifetime showing. See what we did and cannot do again with fire (the crow’s nest is at East Jesus/Slab City now) and performers that have given their creative souls to our stage over the years.” 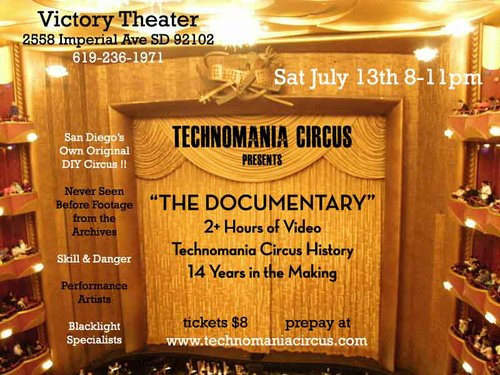