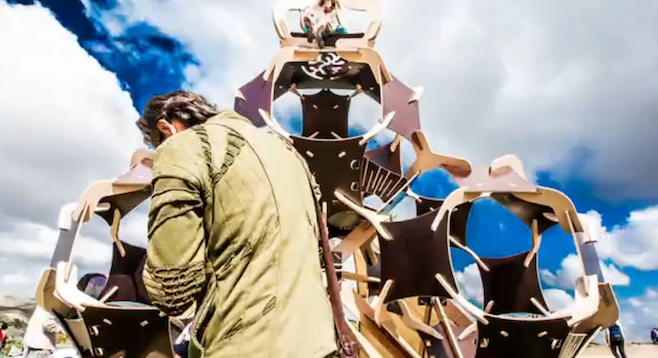 Three years after relocating from the hills of Santa Barbara to Oak Canyon Park on Lake Irvine, Lightning in a Bottle art/music/yoga festival scoots even closer to San Diego this year with a new site in Riverside County.

The festival, scheduled for July 11 through 15, will be held at Lake Skinner County Park in Winchester (home of the annual Temecula Balloon & Wine Festival), about 12 miles northeast of Temecula.

“We are so excited to invite you all to an even more beautiful location surrounded by a big blue lake, majestic Southern California mountains, and more lush green grass than ever before,” writes organizers The Do Lab in a press release.

“Lake Skinner is a hidden gem of Southern California and we feel very lucky to call it our new home. Besides the beautiful views, the new location is more compact, so even though there is more open space, it's all closer together and easier to navigate. It also features full RV hook-ups and a significantly more comfortable camping experience.”

“There will once again be 3 main stages along with tons of smaller stages and interactive areas spread throughout the festival grounds for you to explore and discover. These smaller stages and interactive areas will keep the dancing and festivities going all night long after the main stages close each night. Also, to beat the heat, we have plenty of daytime water areas and features planned to keep you cool, just like our oasis stage at Coachella.”

The location change comes after land bordering Oak Canyon Park was donated to Irvine Ranch Conservancy, putting an end to all festivals at the scenic Lake Irvine campground.

Lightning in a Bottle 2012 Timelapse by Aaron Rogosin presented by The Do LaB from The Do LaB on Vimeo.

Past installments of Lightning in a Bottle have seen performances from several San Diego artists including Red Sonya, Vokab Company, Lee Reynolds, The Album Leaf, Inspired Flight, and Otherwise Entertainment.

The Do Lab also hosts an annual “oasis stage” at the Coachella Valley Music and Arts Festival and recently branched out to throw inaugural events in Egypt and Portugal.