El Cajon Boulevard has a long-standing and ongoing reputation as a nexus of vice and debauchery, but beyond the short-hewn skirts of nightwalkers and shifty alleyway lurkers thrives a vibrant avenue that is home to a number of destinations championed by foodies, craft beercolytes, and creatives of all types.

Bike the Boulevard has offered a periodic glimpse at ECB’s tasteful underbelly since their inaugural ride in November 2010.

“Bicycling has a way of bringing more vibrancy to a city,” Beryl Forman, marketing manager for the El Cajon Boulevard Business Improvement Association, told the Reader in 2011.

“When you see a bunch of bikes in front of a business, it’s attractive, and it draws people in.”

This Saturday, April 27, Bike the Boulevard invites you out for a leisurely ride along San Diego’s slice of old U.S. Route 80, which once connected the west coast to Savannah, Georgia, and was the site of the 1960 El Cajon Boulevard Riot.

Let’s get our adult recreation on! 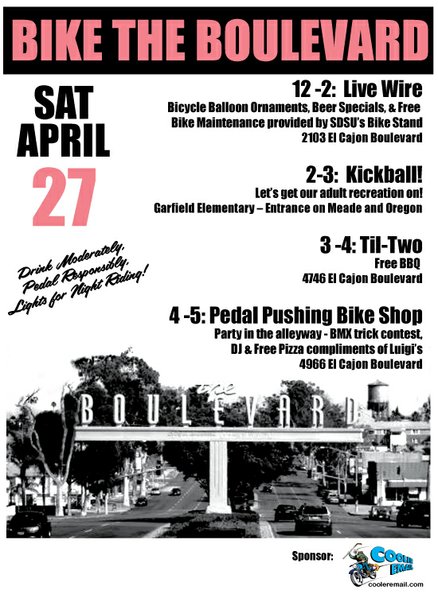