Since June 2012, Green Flash Brewing Co. has been engaging the community with their Brewing it Forward program, which supports a designated grassroots charity by doing what we all do best: drinking beer.

This Saturday, April 27 (3 to 9 p.m.), Green Flash will be benefiting the Washington St. Skate Park Association with an art show, silent auction, and a raffle at their Mira Mesa headquarters (6550 Mira Mesa Blvd.).

For every pint you drink, a dollar goes to this DIY Middletown skatepark, so be sure to show up thirsty and save some appetite for MIHO Gastrotruck.

The year was 1999. The number of skateboard parks in San Diego was zero. Without any designated area to preform their art ticketing and incarceration of skateboarders becomes an ongoing problem for local skaters of the day.

In April 1999, skaters showed up at the squalid, vacant site on the corner of Washington Street and PCH, where the homeless once slept and drug users discarded used needles.

Here is where few locals began their vigilante agenda to build a skate park for skaters by skaters. Taking queues from the locals in Portland Oregon who created Burnside, the first DIY skatepark, this small group began mixing concrete and plying their trade. 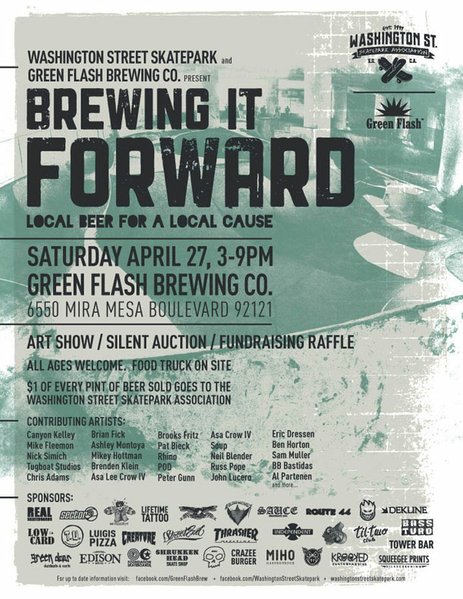