If you grew up in San Diego in the past five decades or so, there’s a good chance you’ve hopped on a skateboard at least a few times.

Surfboard manufacturers Gordon & Smith were among the first to establish America’s Finest City as a skateboard epicenter with the 1964 release of the FibreFlex, the first layered fiberglass skateboard.

For me personally, videos by local companies including Birdhouse, Sector Nine, and Tum Yeto crews such as Toy Machine, Zero, and Foundation, were revered as sacred text.

I know I’m not the only one whose life-long love affair with Sonic Youth began with Ed Templeton’s part in Welcome to Hell.

So maybe you didn’t sk8 or die 4 lyfe like you swore your fourteen-year-old self you would, but that doesn't mean you can't still appreciate a rad feeble grind, a gnarly frontside heelflip, or, as luck would have it, some bitchin deck art by local artists. 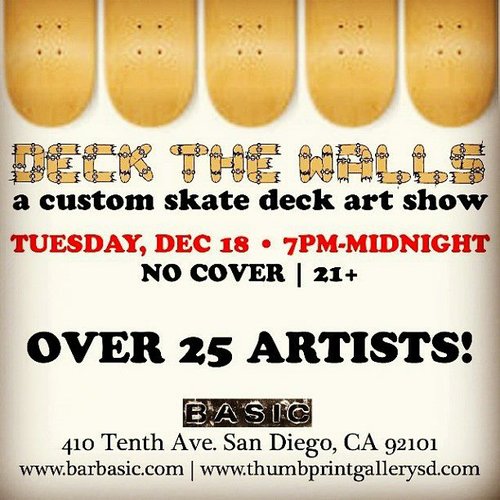