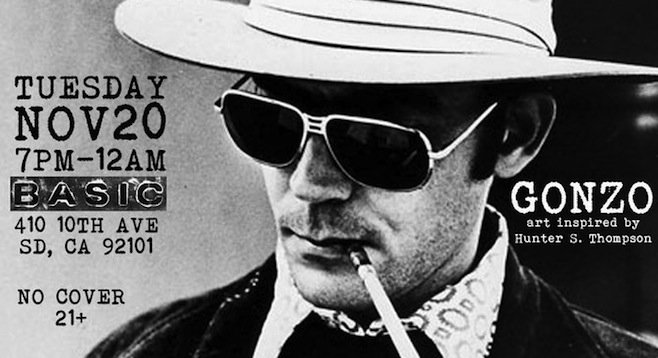 An art and music tribute to Doctor Hunter S. Thompson

In commemoration of perhaps the most influential journalist of the 20th century, Bar Basic (410 Tenth Ave – Downtown) is hosting GONZO: art inspired by Hunter S. Thompson tonight from 7 to 10 p.m.

The free (21+) event, curated by Thumbprint Gallery, will feature art dedicated to the Good Doctor by:

Jewelry and fashion from:

“Hunter Stockton Thompson (July 18, 1937 – February 20, 2005) was an American journalist and author. Born in Louisville, Kentucky to a middle class family, Thompson went off the rails at the age of 15 after the death of his father left the family in poverty. Sentenced to 60 days in prison at the age of 18 for abetting a robbery, he never formally graduated school due to his incarceration. He subsequently joined the United States Air Force before moving into journalism. He travelled frequently, including stints in Puerto Rico and Brazil, before settling in Aspen, Colorado in the early 1960s.

“Thompson became internationally famous with the publication of Hell's Angels: The Strange and Terrible Saga of the Outlaw Motorcycle Gangs (1967), for which he had spent a year living and riding with the Angels, experiencing their lives and hearing their stories first hand. Previously a relatively conventional journalist, with the publication in 1970 of The Kentucky Derby is Decadent and Depraved, he became a counter cultural figure, with his own brand of New Journalism he termed "Gonzo", an experimental style of journalism where reporters involve themselves in the action to such a degree that they become central figures of their stories. The work he remains best known for is Fear and Loathing in Las Vegas: A Savage Journey to the Heart of the American Dream (1972), a rumination on the failure of the 1960s counterculture movement. It was first serialised in Rolling Stone, a magazine with which Thompson would be long associated, and was released as a film starring Johnny Depp and directed by Terry Gilliam in 1998.

“Politically minded, Thompson ran unsuccessfully for sheriff of Pitkin County, Colorado, in 1970, on the Freak Power ticket. He was well known for his inveterate hatred of Richard Nixon, who he claimed represented "that dark, venal, and incurably violent side of the American character" and who he characterised in what many consider to be his biggest contribution to American Literature, Fear and Loathing on the Campaign Trail '72. His output notably declined from the mid 1970s, with Thompson struggling with the consequences of fame, and complaining that he could no longer merely report on events as he was too easily recognised. Thompson was known also for his lifelong use of alcohol and illegal drugs; his love of firearms and his iconoclastic contempt for authoritarianism, and remarked that, "I hate to advocate drugs, alcohol, violence, or insanity to anyone, but they've always worked for me".

“Whilst suffering a bout of health problems, he took his own life at the age of 67. As per his wishes, his ashes were fired out of a cannon in a ceremony funded by his friend, Johnny Depp, and attended by a host of friends including Senator John Kerry and the actor Jack Nicholson. Hari Kunzru wrote that, "the true voice of Thompson is revealed to be that of American moralist ... one who often makes himself ugly to expose the ugliness he sees around him.".