Bailed-out burglar is a no-show for court date

An experienced burglar was arrested after he leaped from the second story of a home where he had been considering the loot, Carlsbad police reported.

It was after 3 p.m. on a Thursday afternoon, August 29, when officers arrived at the 4000 block of Crescent Point.

Police had been called about “a suspicious subject looking in backyards and houses” in the area, according to lieutenant Bruce May. The officers who responded could see a man “inside a house rifling through the owner’s belongings,” the lieutenant reported.

“When officers entered the residence to search for the subject he jumped out a second story window in an attempt to flee,” according to Lt. May.

“He tried to run from us,” police lieutenant Kelly Cain confirmed. The suspect was confronted but continued to resist officers, according to Lt. Cain. “He was combative.”

Lowary was released the same day he was booked, August 30, 2013. The burglary suspect paid a $10,000 fee to The Bail Hotline Bail Bonds company and that company guaranteed his $100,000 bond.

Lowary failed to show up for his first court date on September 6 and Honorable Judge Marshall Hockett issued a $300,000 bench warrant. There is a notice of bond “forfeiture” in Lowary’s case file.

At the time of the alleged burglary, Kenny Lowary was free on bail for a November 2012 arrest. In that case, he pleaded not-guilty to six crimes, including possession of heroin for sale and felon in possession of firearm and resisting officers.

In 1998 and 2001, Lowary was convicted of two different first-degree burglaries and served prison terms for those crimes, according to records. 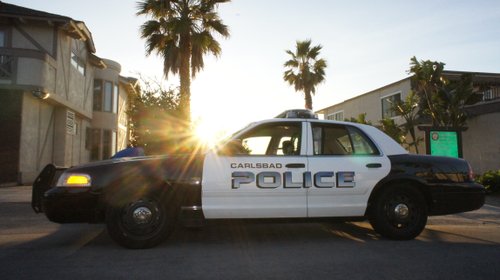 Nice work. Committed a crime while on bail? Why was he released?

There is now a very unhappy bail bondsman who is out a considerable sum, $100,000 to be exact, and who will be looking very hard for Lowary. He comes across in records as a career criminal, but he has the money to make bail, which makes me think that crime can pay.

Jail records suggest Kenny Allen Lowary was booked back into the Vista jail last Thursday, September 19. He is next due to appear in San Diego's North County Superior Courthouse on Monday, September 30, 2013. 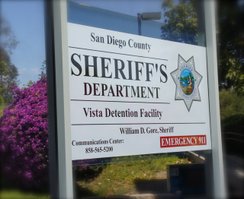 Waiting in the Vista jail.