It didn't take long for Republican city councilman Kevin Faulconer to begin tapping into his deep base of real estate and city lease related political funders. 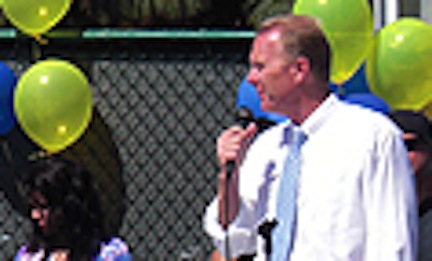 They include Democrat Michael Gelfand, president of Terra Vista Management.

Why would a wealthy Obama backer and 2012 Democratic convention delegate from Rancho Santa Fe give cash to the GOP candidate running for mayor of San Diego?

In addition to operating mobile home, recreation vehicle, apartment, marina and golf properties throughout California and Nevada, Michael has overseen entitlement, development and construction projects at properties the company manages.

Among Terra Vista's real estate is Campland on the Bay, which is leased from the city.

According to a report earlier this year by the San Diego Community News Group, Campland has a bit of business coming up at city hall:

Campland on the Bay’s lease with the city is due to expire in 2017 and the property is to be returned to marshland, according to the Mission Bay Park Master Plan. But Campland general manager Marshall Wiseman believes there’s some wiggle room.

“We’re working our tails off to be able to stay where we are,” said Wiseman. “Campland (which opened in 1969) is the perfect use for land in Mission Bay Park. [Whatever the outcome], we will be on Mission Bay somehow.”

Then there is Bruce Tabb, listed as a real estate developer with Environmental Development, LLC. Tabb is a longtime giver to local politicos of both parties, and during the 2012 congressional funding cycle gave a total of $109,820 to federal candidates, including Democrat Juan Vargas and Republicans Brian Bilbray and Mitt Romney, according to a tally by CampaignMoney.com.

He was a Romney delegate at last year's GOP convention.

Hmmmm, in 1999 I think it was, the British had to return control of Hong Kong for a simple lack of foresight. Sorry 'bout your luck at Campland but you gotta go in four years. Wiggle all you want, you shall, no, must be held to the agreement. And as far as Mr. Faulconer, big surprise here. C'mon San Diego voters. Don't allow either this guy or the party jumping transparent dude in office. They won't work for us.

the eventual race will probably be Faulconer (R) versus Fletcher (D) where all of the other candidates will have to fall to the wayside. that includes saying bye bye to the annoying Mikey Aguirre who is really tilting at windmills thinking that he has a winning candidacy.

Faulconer (R) vs. Fletcher (D) should certainly be a better race with a better result than the original November 2012 run-off election with Demaio (R) versus Filner (D). the ridiculous Demaio-Filner pair of candidates in the November election could have resulted in San Diego getting a possible masturbating-in-city-hall-restroom mayor but instead got us a headlocking grab-ass woman-harassing mayor.

Referring to Fletcher as a (D) doesn't tell the story. If you labelled him a (DINO) that would be more accurate. Prior to his party switcheroo in the recent election, he would have been best described as (RINO). He owes no allegiance to anything other than himself and his big-bucks backers. A recent comment said he was a "Conservative Republican", masquerading as a Dem. He's neither. If you need a label, it is (CPO) which stands for, as of now due to my invention of the term, "Complete Political Opportunist."

The race will be between Aguirre, Marty Block, and Lori Saldala, or other Liberals. The voters mandated a Very Liberal Democrat. Anyway, any new Mayor in a field of 50 or 100 candidates will win with 10% of the vote and be recalled immediately.

Your "annoying Mikey Aguirre" is beloved by many people in this town and, as a candidate with name recognition, will strip votes from "the party-jumping dude, (PJD.)"

Excellent Democratic Councilman David Alvarez will do the same.

And then there is darkhorse local hero land-use specialist Bruce Coons, reportedly a Dem, who actually saved Balboa Park from the remodeling clutches of billionaire Irwin Jacobs by suing and winning! No one dreamed it could be done.

The Jacobses will be writing checks for the PJD, but to no avail, since there will be a rich field of qualified candidates to continue the interrupted work of returning this city to the people.

One of the positive legacies of our recent liberal populist Mayor may be that voters realize they needn't settle for the Usual Republican Toady Candidates (URTC) of developers, bankers and hoteliers who have always benefitted from puppet mayors. Doug Manchester will be writing checks for the URTC guy in the race.

David Alvarez is a Conservative Republican, masquerading as a Democrat, same as Fletcher.

Not even San Diego Democrats can masquerade as Democrats as well as the party-jumping dude.

Right, Democratic Councilman David Alvarez is just like that other right-wing addition to the mayoral roster, Democratic former Assembly candidate Lori Saldana who is collecting qualifying signatures this week.

Monaghan: I heard this morning that the Labor Council has endorsed Alvarez. What is the significance of that compared to the other unions and groups?