In what could be a precursor of things to come in San Diego's great mayoral race of 2013, war has erupted between Sacramento mayor Kevin Johnson and the San Diego-based Coalition for Fair Employment in Construction.

The first volley came yesterday at a news conference that Johnson called to announce a so-called project labor agreement giving union workers a lock on the jobs to build a new downtown basketball arena for the Sacramento Kings. 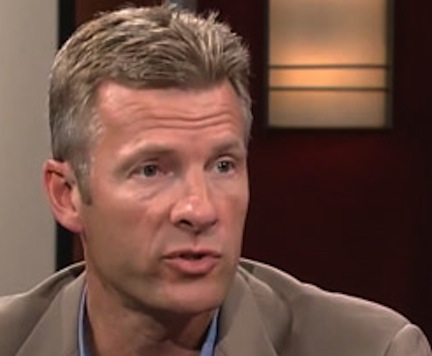 As reported in today's Sacramento Bee:

Moments after the mayor hailed the deal at a Wednesday afternoon news conference, a Roseville political consultant named Kevin Dayton grabbed Johnson's microphone to denounce the agreement, which will steer the bulk of the $448 million project to union workers.

"Yes, there will be a fight," Dayton shouted. He was booed by dozens of hard-hatted union workers before the mike was pulled away a minute later by mayoral press secretary Ben Sosenko.

But the shouting didn't stop there. San Diego's Eric Christen, who runs the so-called fair employment coalition, vowed to raise the stakes for the project if the mayor didn't back down on the arena deal.

Christen, head of a group that represents nonunion contractors, said his group would likely contribute money to the volunteer organization trying to force a ballot initiative that could derail the arena's proposed $258 million taxpayer subsidy.

"Our guys are furious about this," said Christen, head of the San Diego-based Coalition for Fair Employment in Construction, which has worked with Dayton.

That would pit Christen and San Diego's non-union contractors against none other than the wealthy sons of San Diego's richest man and multi-million-dollar Democratic backer, Qualcomm founder Irwin Jacobs. 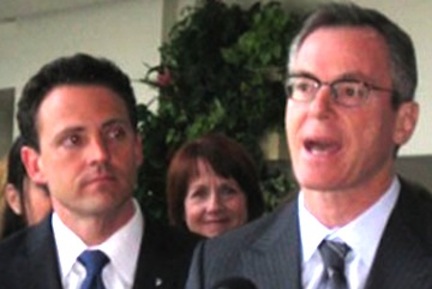 As reported here in May, the three Jacobs brothers, Paul, Jeff and Hal, have sunk an undisclosed amount of cash into a group that bought the Kings basketball franchise and agreed not to move it on condition that the taxpayers of Sacramento finance a lavish new downtown arena for the team.

The royal Jacobs brothers will occupy a rotating "vice chairmanship" for their money and any initiative effort that cancelled the sweetheart arena deal's taxpayer financing would presumably not go down well with the well-heeled La Jolla and Del Mar residents.

Kings president Chris Granger, according to the Bee, “applauded the agreement, telling the crowd at Downtown Plaza it will make sure the arena is open by fall 2016 – one year before the deadline imposed by the NBA.

“This ‘will provide us with great comfort and certainty,’ Granger said.”

Last year Christen spearheaded a successful ballot drive to ban the city of San Diego from entering into project labor agreements, but GOP ex-mayor Jerry Sanders - a major beneficiary of Jacobs family political funding - later did an end run around the new law to cut a deal with big labor for expansion of the city's downtown convention center.

The mayor's secret plotting was detailed in emails unearthed this summer by Christen's group, as reported by Dorian Hargrove here in July:

The lawsuit alleges that Sanders, along with his Chief of Staff Julie Dubick, conspired with labor-union president turned California Assembly member Lorena Gonzalez to enter into a labor agreement with Clark Hunt construction groups in their bid to manage the massive overhaul.

The backroom deal, according to the lawsuit, sidestepped Proposition A's ban on collective bargaining for all city-funded construction projects.

Emails obtained through a public records request, reveal that in the waning days of his term, Sanders and Dubick were fast at work to broker a deal that would end litigation filed by the labor unions and jumpstart the project.

In brokering the deal, Dubick made sure to use her private Gmail account to set up meetings between Sanders and Gonzalez.

"Here is the suggested language [for the agreement]. Please confirm receipt to [gmail address]. See you at 2pm," wrote Dubick in a September 21, 2012 email to Gonzalez.

In her email, Dubick included the terms of the deal. Sanders would agree to skirt Proposition A and adopt a labor agreement similar to the one used for Petco Park.

He would also meet with officials with Marriott Hotels to discuss labor issues. In return, Gonzalez would pledge her support for the project to the city council and Coastal Commission and drop all pending litigation over the expansion.

One week after Dubick's email, Clark Hunt was awarded the contract.

That project, along with its public financing and possibilities for corruption, remains the target of widespread contention, and is likely to be on the lengthy list of mayoral issues to be faced by the candidates, including Qualcomm development director Nathan Fletcher, the presumed Jacobs family favorite in the race. 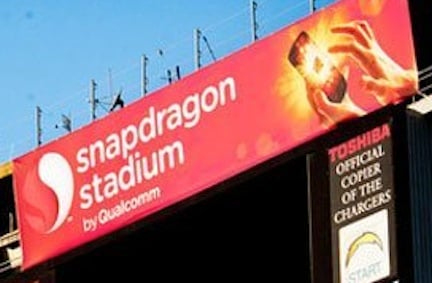 As the Sanders emails show, under San Diego's controversially drawn strong mayor powers, the city's top elected official has often been able to get his way in closed door deals, in some cases virtually ignoring the law.

Another example from the Sanders reign was the so-called Snapdragon Stadium gambit, in which Sanders ignored advice from city attorney Jan Goldsmith that the agreement was illegal and signed off on a lucrative temporary stadium name change to benefit the cell phone giant that had been so generous to his political cause.

The Dayton/Christen folks are priceless. 'You aren't allowed to build a major project unless you allow for shoddy work, don't guard against cost or time overruns, minimize the jobs produced for the community, and use the workers you import to undercut the local economy! And we'll spend whatever it takes to block any benefit for anyone but us by popping your ball and going home.'

At first it's puzzling why the Jacobs family -- NBA Sacramento Kings co-owners -- would favor a mandated project labor agreement, driving up the cost of the team's new sports arena by $70 million dollars or more.

But the answer is obvious -- though the Kings team owners will profit mightily from the new sports arena, it's the hapless Sacramento TAXPAYERS who will pay for most or all of the cost. And the Jacobs family doesn't even LIVE in Sacramento!

Well, if any city in California has to be screwed by such foolish extravagance, it's poetic justice that it's our profligate state capital.