Pair accused in doggie-door-burglary are due in court today

It was 9:33 a.m. on a Wednesday morning almost a year ago, on June 20 2012, when a woman phoned police and said her daughter was at home while two intruders came into their house through the doggie door.

The child had used her cell phone to call her mother, after she escaped the residence in the 4300 block of Yosemite Street, according to Carlsbad police. The girl told police she did not answer the front door when a man and woman knocked, and then she heard the pair coming in by way of the doggie door.

At that time 22-year-old Natalie Espinoza was on parole and 24-year-old Emmanuel Saucedo was on probation, police stated.

Court records show that in 2008, eighteen-year-old Natalie Espinoza pleaded guilty to first degree burglary of an inhabited home and DUI. In that deal, charges of stolen vehicle and possession of stolen goods and possession of drugs and under influence of meth were dismissed. The young offender was released into a drug treatment program in May 2008. In January of 2009 Natalie Espinoza admitted attacking a “Jane Doe” witness while bystanders “watched;” she stated in a plea deal “I did unlawfully conspire to commit witness intimidation. I did so to aid a criminal street gang.” She was sentenced to 2 years State prison, that time to run concurrent with time for the prior charges. Natalie Espinoza was back on the street by December 2010, when she was charged with possession of drug paraphernalia and giving false ID to a peace officer, she pleaded guilty and was granted summary probation (that means she was turned loose without supervision).

Emmanuel Saucedo admitted meth possession in 2010, he was immediately released into a drug program. Records show he failed to show up for any “treatments” and he was re-arrested multiple times and brought into court throughout 2011 and into early 2012. In March of 2012 he was arrested for possession of meth and giving false ID to a peace officer. Emmanuel Saucedo quickly bailed out and then was a “failure to appear” for an April 18, 2012 court appearance. The Carlsbad doggie-door burglary allegedly occurred on June 20 2012.

Emmanuel Saucedo, now 25, and Natalie Joanna Espinoza, now 23, have been held in local custody since their arrest last June. Both apparently made plea deals in the new case, they are on calendar for sentencing today.

Saucedo and Espinoza will appear before the Honorable Judge Aaron Katz in San Diego’s North County Courthouse this afternoon, May 22, 2013. 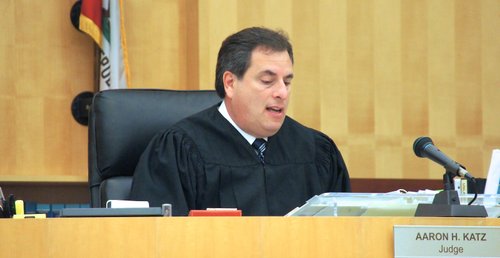