Will get six months local jail time, according to the plea deal

At the time of her arrest, on April 30, 2013, a Sheriff’s spokesman stated that the teen created more than 300 separate graffiti defacements, and signed some of them HAZE.

Sergeant G. Twyman said the woman’s promiscuous scribbling was documented from August of last year until her arrest in April 2013. Her criminal mischief caused more than $100,000 in costs, despoiling public property, according to the sergeant.

“She has been linked to a crew called CFB,” said Sgt. Twyman. That group identifies itself as Cali Female Bombers, according to the sergeant.

Ramona Elena Montes, 18, is currently held at the Las Colinas detention facility for women, which is in the eastern part of San Diego County in the community of Santee.

Plea deal paperwork shows that Montes admitted five separate criminal acts, all felonies, in December of 2012 and January and February and April of 2013. When she was arraigned two weeks ago, Montes was charged with 40 felonies and 22 misdemeanors.

Ramona Elena Montes expects to be sentenced to 180 days local custody when she is in court June 12, 2013, by the same judge who took her plea, the Honorable David Berry. 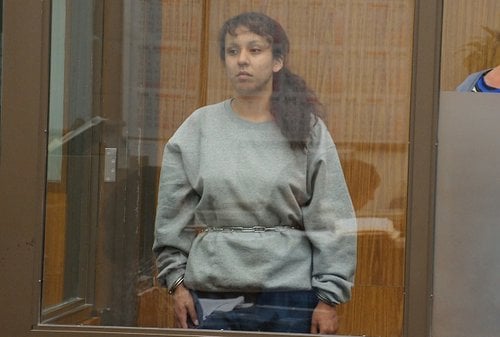 Five felonies gets a six month jail stay? That is a soft sentence if ever I heard of one.

Why isn't she having to pay $thousands toward the damages, out of her future earnings when she gets out and eventually gets a job? Either that, or she should be doing graffiti cleanup for a year or so.