With the direct-mail big money brawl between two Democrats in San Diego's Fourth District still raging, county Republicans are already ramping up to endorse their standard bearers for next year.

As previously reported, the battle between union-backed Myrtle Cole and the GOP downtown Lincoln Club's favorite Dwayne Crenshaw has set new records for independent spending by deep pocketed special interests, including a glittering array of real estate lobbyists and other influence peddlers. 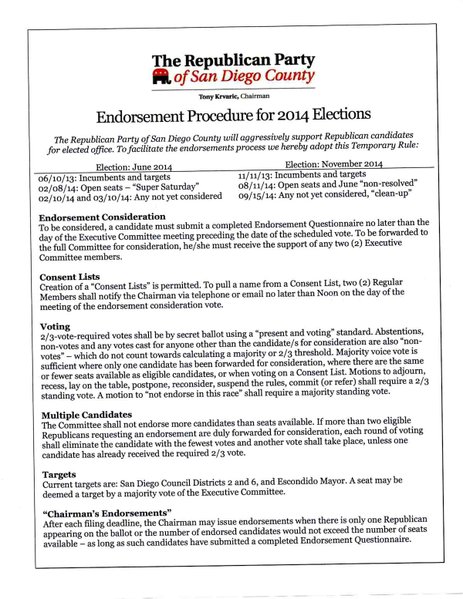 Even a community college teachers union has stepped into the fray.

But that may be only the curtain raiser for next year's contests, to feature a wide-open Sixth District field and an expected well-financed attempt by Democrats to knock off Republican Second District hopeful Lorie Zapf, who beat Democratic ex-Assemblyman Howard Wayne in the Sixth District the last time out.

Incumbent Zapf 's residence was redistricted from the Sixth to the Second District last year, and her decision to stay put and run for that seat, now held by termed-out Republican Kevin Faulconer, has created an open opportunity in the Sixth.

The group went to the mat for Republican Brown and his allies, including UT San Diego owner and hotel developer Douglas Manchester, in their unsucessful court battle to get Democratic mayor Bob Filner to sign off on a tourism funding deal negotiated by previous GOP mayor Jerry Sanders, who was a major beneficiary of political funding from the city's hotel lobby.

Cate, a former Faulconer staffer who moved into the district from Carlsbad, would appear to be the downtown establishment's favorite in the GOP endorsement race, but fellow Republican Azul has vowed to wage a full-out grass roots battle for the Republicans' official nod. Lee is registered decline to state.

In addition to those contests, Democrat David Alvarez will be defending his District Eight seat, as presumably will the winner of this month's special election race for District Four, virtually ensuring a big spending local campaign season