This past April Fools day, some wag posted an item on the Internet saying that ex-Assemblyman Nathan Fletcher, who began his run for mayor last year as a Republican and switched mid-campaign to a self-proclaimed "independent," was returning to the GOP. 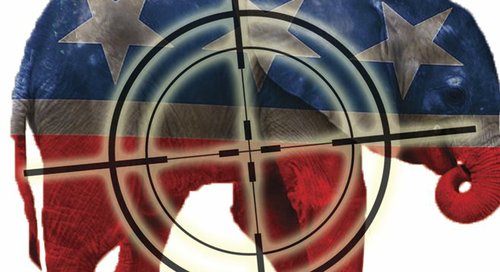 That was a joke, but now, according to the modern day equivalent of the horse's mouth - Fletcher's own Facebook page - the one-time Republican party state operative who is married to a former press aide to George W. Bush, has pulled yet another switch: he's become a Democrat.

...because I grew up in a working class blue-collar Democratic family I was often asked why I was a Republican. It was because I thought their policies provided the best access to the American Dream.

I no longer believe that is true. In my opinion, the GOP today is more focused on protecting those who have already achieved the American Dream than allowing others access to it.

Fletcher's self-described "blue-collar" upbringing and earlier life - details of which are not related in his official bio, as previously reported here - had a hard edge, but before turning independent last year his public profile had always been that of a staunch Republican. 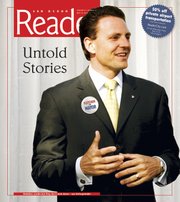 Following his exit from the Assembly, Fletcher was hired by Qualcomm.

Irwin Jacobs and family members have given millions of dollars to Democratic causes over the years, including last year's $2 million to an independent effort to help re-elect Barack Obama.

Why not be a Jacobs-style Democrat? There are lots of them in this town. But Nathan Fletcher is by far the guy with the most chutzpah, the most adroit at personal reinvention, the most fantastic of San Diego's many manipulative Mr. Ripleys.

Why not go for it, if you have never had an inner compass, have always opted for the main chance -- no matter how tawdry, as in heading the local office of GOP Congressman Randy "Duke" Cunningham who went to prison for selling votes for bribes, or for politically exploiting the murders of teenage constituents? Why not take a cushy handout high-visibility job at Jacobs' Qualcomm after losing the GOP race for Mayor of San Diego if you can be photogenic, youngish, buff and macho, can put your babies' pix on your Twitter ID and still flog a Marine Corps connection while huskily mouthing platitudes about "the American Dream" in 2013 without embarrassment?

Nouveau Republicrats like Nathan Fletcher are all about fakery and salesmanship. But shame on the Democratic Party for giving a hustler like this shelter, and woe to the voting public that buys his line and elects him to anything in the future.

Well said! A look at some of those locals who "welcome" him to the Democratic party that they claim to belong to gives an idea of what the party label can mean here in San Diego. Those Nouveau Republicrats include the shameful Marcella Escobar-Eck, and Jerry Sanders' former mouthpiece Rachel Laing.

Well said, indeed. I was going to post a comment about this switcheroo, but you said it so well that I have little to add.

The Republican party in San Diego is not big enough for both DeMaio and Fletcher, and Fletcher is the odd man out, so he switched parties. The same thing happened to Newt Gingrich, He first ran for congress as a Democrat and found he was unelectable, so he switched parties and ran for congress as a Republican. As a professional politician, Fletcher can tow the Democratic line just as well as he can tow the Republican line.

Burwell, you attempt to routinize an outrage. And by the way, I think you mean "toe the mark" rather than "tow the line." Anyway, Newt Gingrich is not a role model for anybody.

The April Fool's post was made by Barry Jantz on SD Rostra, a local conservative/libertarian Web site. Little did he know ...