The United States Drug Enforcement Agency (DEA) released a poster which shows six Mexican drug traffickers and offers a reward for each on Friday, May 3rd. According to the DEA, the men featured in the poster are allegedly the top drug traffickers in Southern California and much of Baja California.

Two of the men shown are the leaders of the Sinaloa cartel, Joaquin "El Chapo" Guzman and Ismael "El Mayo" Zambada. Fernando "El Ingeniero" Sanchez Arellano, the alleged leader of the Arellano-Félix Organization, is also shown on the poster.

Brothers Alfonzo "El Aquiles" Arzate Garcia and Rene "La Rana" Arzate Garcia are also listed on the poster. The brothers are alleged to work for the Sinaloa cartel and to have caused much of the local violence in recent years.

Jose Antonio "El Tigre" Soto Gastelum is the sixth man shown on the poster and also a wanted Sinaloa cartel drug trafficker in the Tijuana area.

Rewards vary on the value of information given. Toll free numbers are provided for the U.S. and Mexico. The poster was released within hours of the conclusion of U.S. President Barack Obama's Mexico visit. 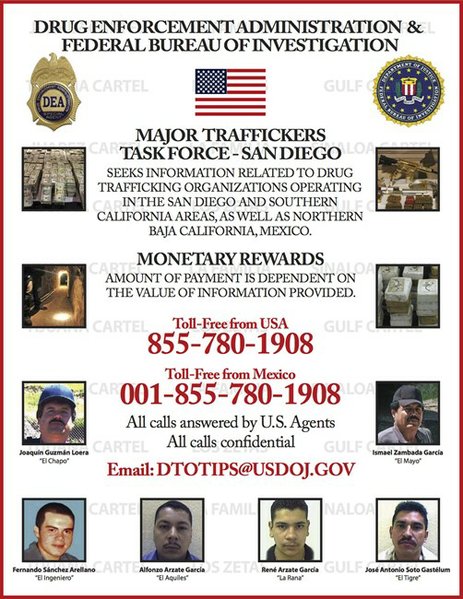