According to a United States government report recently released, a weapon from the "Operation Fast and Furious" was seized in Tijuana from a group intending to assassinate Julián Leyzaola, who was the chief of police at the time. The firearm was seized on February 25th, 2010, along with other weapons seized and arrests made.

A chain of arrests were made in early 2010 in taking down a Baja based criminal group led by Teodoro "El Teo" García Simental and Raydel "El Muletas" López Uriarte. El Teo was an important member of the Arellano-Félix Organization (AFO) before splitting from the AFO and running his own group, which forged unreliable ties with the Sinaloa Cartel.

The El Paso Times reported this morning, August 6, 2012, that the weapon which was seized during one of the raids, apparently was being tracked by the Bureau of Alcohol, Firearms, Tobacco and Explosives (ATF) in Pheonix, AZ. The group was planning on killing the current chief of police but was stopped before doing so. Leyzaola, the former chief of police of Tijuana, is now the chief of police of Ciudad Juarez.

The ATF’s Operation Fast and Furious, which was intended to track down important cartel leaders down by letting traceable weapons into Mexico, failed miserably. The operation is the subject of multiple investigations of the mishandling of weapons and numerous deaths. In December of 2010, U.S. Border Patrol Agent Brian Terry was believed to have been killed by weapons involved in the operation.

A report by the U.S. House Oversight and Government Reform Committee was released on July 31st, 2012, detailing the failed operation. The 2,359 report is the summary of over 10,000 pages of documents and numerous interviews.

In June, a House committee voted to hold Attorney General Eric Holder in contempt of Congress for failing to turn over Justice Department documents related to the Fast and Furious Operation. President Barack Obama had decided earlier in the day to assert executive privilege for the first time in his administration in order to protect the confidentiality of the documents. The Justice Department decided soon after it would not pursue the case, but House Republicans intend to file a civil suit against Holder to release the documents. 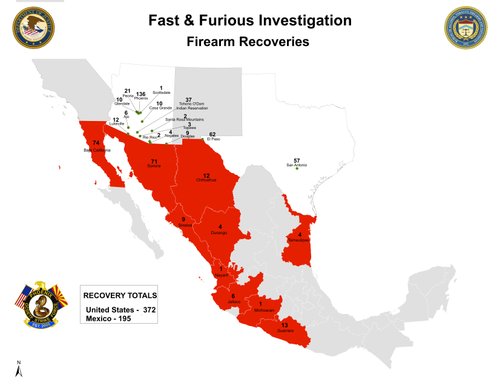